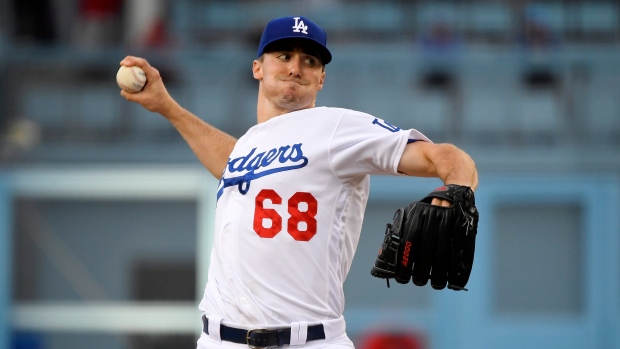 Ross Stripling has spent much of the last two months working on an island —- the one in the kitchen of his Houston home.

With baseball halted by the coronavirus pandemic, the Los Angeles Dodgers right-hander returned to his off-season job. When not throwing fastballs, he pitches clients as a financial adviser for B. Riley Wealth Management.

The All-Star has retired George Springer in the World Series on a bases-loaded fly that Stripling was sure would be a grand slam. And he’s logged on in the morning, seen a stock drop 30% and felt his heart sink into the pit of his stomach.

“When I have someone else’s money in my hands and that’s their future, their nest egg, there’s a lot of pressure there,” Stripling said. “There’s a lot of anxiety to perform well for their sake.”

Interest rates approaching 0 have been on his mind more these days than spin rates of 2,650. No need to look up ERA, but a daily dissection is essential of an elevated VIX, the “fear index” of market volatility.

Analytic skills and “going with your gut” are indispensable for both vocations.

“I’m a numbers guy, so the ability to scout and do scouting reports and prepare for a lineup has, I think, really transferred over from my stock market stuff,” Stripling said.

The 30-year-old Stripling is bullish. He manages about $10 million in assets across roughly 40 stocks and 10 accounts, including one or two from among teammates.

To be a Bad News Bear has an entirely different meaning on Wall Street.

“Pitchers have to factor in various situational elements like score, fatigue, opposing lineup, weather, and all that stuff is analogous to sector trends, macroeconomic trends,” said Gerry Cardinale, CEO of RedBird Capital Partners and a board member of Yankee Global Enterprises, the team’s parent company.

Stripling reached the big leagues with 7 1/3 hitless innings at San Francisco on April 8, 2016, when Dodgers manager Dave Roberts removed him after 100 pitches.

While California’s 12.3% top tax rate applies to Stripling’s salary, the signing bonus was not subject to state income tax because Texas does not have one.

“Looks like I have a crystal ball, right, I got so lucky,” Stripling said.

An infielder who had never played above junior varsity at Carroll Senior High School in Southlake, Texas, Stripling broke his left shinbone during basketball practice in the 11th grade. The injury caused him to switch to pitching, and he went 14-0 as a senior in 2008.

Bypassed in the amateur draft, he went to Texas A&M and was invited to fall ball as a preferred walk-on.

Stripling helped the Aggies reach the College World Series in 2011, going 14-2 and leading Division I in wins. Drafted by Colorado in the ninth round, Stripling stayed for his senior year and got a bachelor’s degree in business finance. He pitched a no-hitter against San Diego State, missing commencement that was taking place simultaneously.

During Stripling’s rehab that fall, maternal grandfather Bob Thomas telephoned Lynn Houston, his longtime adviser and the head of B. Riley’s local office. Stripling was given an interview with Houston and son Matthew.

“He didn’t know if his arm was going to recover or not, so he started to look at backup plans in case he wasn’t able to pitch,” Matthew Houston recalled. “When he came in for the interview, he had a folder about an inch thick of handwritten stock reports and we sat down with him with no intention of hiring anybody. And before we knew it, we were: `We’ve got to have this kid. He knows what he’s talking about.‘”

Stripling averages four days a week at the office between the end of the season and spring training.

A second occupation used to be common for big leaguers before free agency in 1976. Bob Boone manned the shoe department at a sporting goods store.

“If somebody had the capability of doing a highbrow job like that in the off-season, we’d probably ask him: `Why the hell are you playing baseball?’” Boone said with a laugh.

Said Roberts: “I’m probably leading the board in asking him for tips.”

“When we were coming up, guys essentially weren’t well-rounded. If you weren’t 100% committed to baseball only, it was almost frowned upon because you don’t care as much as the next guy,” the former big league outfielder said.

For now, he’s content to navigate a fragile financial world rather than stocked batting orders. His won-lost record in the market remains a secret stat -- B. Riley won’t let him say.

He does have a regret: missing previous bull markets.

“It would’ve been fun,” he said, “to be able to buy the Walmarts and the Amazons and the Apples of the world 20, 30 years ago and be retired right now, sitting on my yacht.”