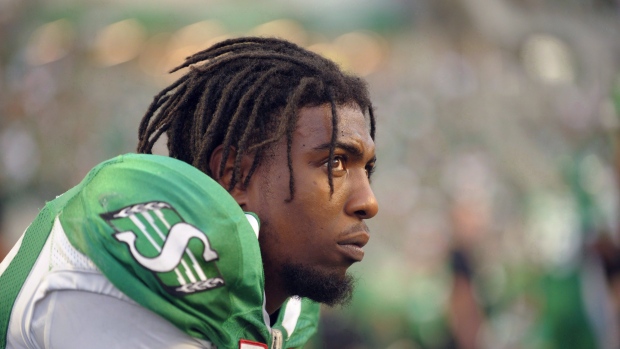 Carter, 27, has 111 yards and one touchdown in seven games this season.

The native of Fort Lauderdale, Fla., tweeted his reaction following his release.

I might be done with football man... find a job that travels around the world, something where I can be myself 🤷🏾‍♂️

TSN's Farhan Lalji reports that the Roughriders did not give Carter any reason for his release.

Duron Carter wasn’t given any reason for his release. Was thanked for his work on both sides of the ball & told the team was moving in another direction.
Veteran contracts aren’t guaranteed until after 9th game, so #Riders arent on the hook for the balance of the year. @CFLonTSN

Carter is currently in Montreal on #Riders bye week. Says there was no conflict with coaches. Isnt concerned about why, more focused on his next move. i would expect it wont take him long to find a new home.
Curious if this will lead to anything with Terrell Owens. @CFLonTSN

Following their loss to the Ottawa Redblacks Saturday night, Montreal Alouettes general manager Kavis Reed told Herb Zurkowsky of the Montreal Gazette that he would be in contact with Carter. Carter played in Montreal from 2013 to 2016.

#Alouettes GM Kavis Reed told me after the game he will contact receiver @DC_CHILLIN_8, who was released tonight by Saskatchewan

The Ohio State product was the Roughriders' top receiver in 2017 with a 1,043 yards and eight TDs, but he was shifted to cornerback in the second week of this season after Nick Marshall suffered a finger injury.

He was moved back to offence last game, making three catches for 59 yards and one TD.

In June, Carter pleaded not guilty to a charge of possessing pot at the Saskatoon airport last February.

He is scheduled to stand trial in December.

He pleaded guilty earlier in June to a similar offence at Winnipeg's airport in November 2017. Carter was granted an absolute discharge.

The Roughriders gave Owens a look after the Edmonton Eskimos released him from their negotiation list in July.

Edmonton placed Owens, who last played in the NFL in 2010, on its 45-man negotiation list on June 19, shortly after he posted a video of himself running a 4.43-second 40-yard dash. Later, Owens activated a 10-day window to receive a contract offer from the Eskimos, who opted against making that move.

Once the 10-day window was activated, Edmonton had four options: offer Owens a contract; trade his rights; release him prior to the end of the 10-day period; or make no offer over the 10-day period, at which time he would've been released automatically from the Eskimos negotiation list.

If Edmonton had made Owens a contract offer and he rejected it, Owens would've remained on the Eskimos negotiation list for another year, which would've given the two sides more time to work out a deal.

Owens has been out of football since 2012 when he had 35 catches for 420 yards and 10 TDs over eight games with the Allen Wranglers of the Indoor Football League. Owens signed with the NFL's Seattle Seahawks during training camp that year but was released.

He's ranked second all-time in receiving yards and third in receiving TDs. Owens was a five-time first-team All-Pro and a six-time Pro Bowler.