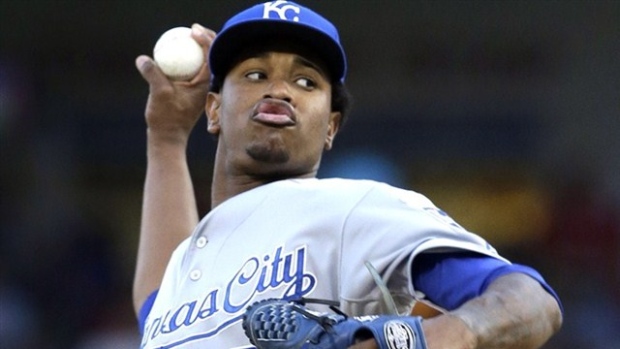 The Kansas City Royals try to take a commanding two games to none lead in the American League Championship Series on Saturday when they play Game 2 against the Baltimore Orioles at Camden Yards.

Kansas City became the first team in baseball history to win four extra-inning games in a single postseason on Friday, as Alex Gordon crushed a leadoff homer in the 10th and Mike Moustakas added the deciding two-run blast in the Royals' 8-6 win.

"We just find ways to win ballgames," Yost said. "These guys will find a way to get it done."

The Royals, who won just five extra-inning contests during the regular season, had led, 4-0, and, 5-1, only to see the Orioles rally. Baltimore also worked itself out of a bases-loaded jam in the ninth.

"I was proud with the way our guys battled back, especially with (James) Shields out there," Orioles manager Buck Showalter said.

Gordon broke a 5-5 tie when he turned on a Darren O'Day fastball and sent a screaming line drive into the right-field seats for his first career postseason home run.

Brian Matusz relieved O'Day and served up Moustakas' third round-tripper of the postseason, which proved vital after Greg Holland gave up a run in Baltimore's last at-bat.

"We know we're capable of hitting home runs," said Gordon, who also added a three-run double. "We didn't do it during the regular season. But it doesn't really matter. This is the postseason and we're starting to swing the bats better now."

Kansas City, which has won eight straight playoff games, beat the Oakland Athletics in extra innings to win the wild card before beating the Los Angeles Angels of Anaheim in extras in the first two games of the ALDS.

The Royals hit the fewest amount of home runs in the majors this season with 95, but have hit seven this postseason.

"We're proving people wrong," the Royals' Eric Hosmer said. "No one thinks we can do this. It's a bunch of guys in here who want to prove people wrong, and we're having fun doing it."

Now, the Royals will turn to rookie right-hander Yordano Ventura.

"We like the fact that he's got overpowering stuff," Kansas City manager Ned Yost said. "He pitched two extremely good games against Baltimore this year, and he's throwing the ball well right now."

Ventura struck out 17 batters while giving up only two runs in 14 1/3 innings in two starts (1-1) against the Orioles over the first two months of the season.

The 23-year-old hurler was nearly the goat of the Royals' wild card win over Oakland, as he surrendered a go-ahead three-run homer to Brandon Moss in relief, but bounced back to deliver seven innings of one-run ball in KC's Game 2 win over the Angels in the ALDS.

"I'm always ready," Ventura said through his interpreter, teammate Jeremy Guthrie. "I'll always be as prepared as I can and be aggressive whenever they give me the ball."

Baltimore, meanwhile, will turn to righty Bud Norris, who threw 6 1/3 scoreless innings in the O's clincher over the Tigers and is 5-0 since the start of September.

"I'm excited to get another opportunity to go out there and do what I do, because these guys have been here all year cheering us on," Norris said. "They've been outstanding. To get this far is great. I know they're going to be pretty excited and loud tomorrow, too."

The Royals won four of seven from the Orioles during the regular season, outscoring Baltimore 26-18.