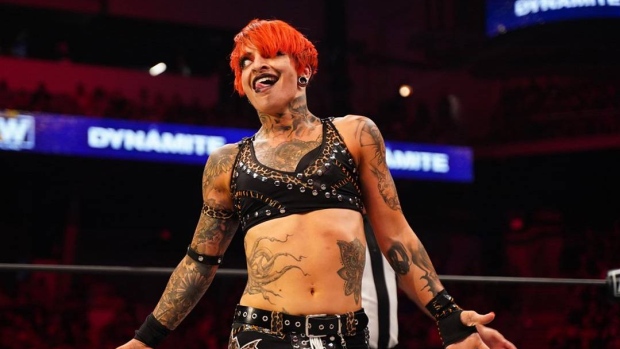 On the evening of Sept. 5, the 21-woman Casino Battle Royale at All Elite Wrestling’s All Out pay-per-view was approaching its crescendo.

Twenty of the competitors had entered the ring and only one remained, “the wild card,” whose identity was unknown prior to the match. But the fans at the Now Arena just outside of Chicago knew who to expect.

As the countdown clock approached zero, chants of “Ru-by So-ho” rang down throughout the crowd. When Ruby Soho did, in fact, appear on the stage as the final entrant, the crowd erupted in cheers with a reception so large that Soho herself was clearly taken aback.

That emotion fans saw on her face that night, Soho says, was genuine.

“When I heard them start to chant a name that I hadn’t even gone by yet, it was overwhelming,” Soho told TSN.ca ahead of her AEW Women’s World Championship match at Grand Slam on Wednesday night from Queens, N.Y.’s Arthur Ashe Stadium.

“It felt like every single decision I had made up until that point was the right one because it led me to that moment. I was shaking. My heart was beating out of my chest. I heard that and it was a moment where I just felt like I wanted to hug every single one of those fans individually and tell them ‘Thank you’ because I was just elated. I felt welcomed and appreciated and I felt home for the first time, and I hadn’t even stepped on the stage yet. The emotion you saw on my face was real and true and pure. I wanted to live in that moment because it was the most special one in the world to me.”

You can catch AEW Grand Slam LIVE at 8pm et/5pm pt on TSN2, the TSN app, streaming on TSN Direct, and on TSN.ca.

Soho is 30-year-old Dori Prange of Edwardsburg, MI. A well-known independent wrestler from her time in promotions like SHIMMER and CHIKARA, Soho signed with World Wrestling Entertainment in 2016 and spent the past five years in WWE as Ruby Riott.

As part of a number of talent cuts, Soho was released by the WWE on June 2. Standard as part of any WWE main-roster release, she was then subject to a 90-day no-compete clause. Soho says she used that time to take stock of where she was, what she wanted and how to move forward.

“I had a lot of waves of different emotions – some anxiety, some sadness, some disappointment, some excitement, some anticipation,” Soho said. “I think mainly it was focused on building the life I wanted for the next chapter and a lot of that was focusing on what I wanted out my career, who I was presenting myself as, as a performer, and some of it was even on how I wanted to build my home. I had just moved shortly before I had been released and I had built a farm in Ohio. I’ve wanted horses since I was a kid, and I bought some horses.

“I built a life for myself outside of wrestling that I knew was something I always wanted and a lot of choices that I made were made for me and made in my interests and that also reflected into wrestling, as well. Now it was time to be able to focus on and build my brand and who I wanted to be and show the world who I was and what they hadn’t seen yet.”

Embarking on the next stage of her career, Soho knew she didn’t want to look backwards. She quickly decided against once again adopting the Heidi Lovelace (pronounced “Loveless”) name she used prior to her WWE days.

“It wasn’t a name that I came up with myself,” Soho said of the moniker. “I was in a small-town promotion close to my house and hadn’t really ventured out into the world of independent wrestling yet. And on top of that, nobody could really pronounce my last name correctly. They would pronounce it ‘Love-lace,’ so naturally I’m the only person in independent wrestling who has a last name that’s difficult to pronounce. Good job! It didn’t feel like it was a choice of my own and going forward in my career I wanted there to be a central focus that these choices are mine, these are the things I’m doing, and this is the destiny that I’m creating.”

The inspiration for a new ring name came from a punk icon. Over the past several years, Soho had cultivated a friendship with Lars Frederiksen, the guitarist for legendary Bay Area band, Rancid.

Soho says the friendship was born a few years back when she asked for permission to recreate the look the band used in a photoshoot for some new wrestling gear.

“I reached out to him to ask him, ‘I dunno if this is weird, but do you think I could use this photo shoot from Inked Magazine and recreate this look for my pay-per-view gear?’ and he was elated,” Soho said. “He was so excited. He was like ‘Oh, I’d be honoured! That’s so cool. Let me know if you need anything.’ He sent me a bunch of Rancid stuff, I sent him a bunch of wrestling merch and from there it kinda sparked a friendship.”

On an episode of his podcast, Frederiksen offered the name “Ruby Soho” to her, as well as the use of the Rancid song “Ruby Soho,” from the 1995 album …And Out Come the Wolves, as what Soho calls “the coolest entrance music in the history of wrestling.”

Where Ruby Soho wanted to pop up after her exit from WWE was never a doubt in her mind but only a question of whether they would have her.

For her, the company aligns perfectly with her vision of pro wrestling.

"AEW emulates everything I love about pro wrestling, which is diversity, complexity and just something different,” Soho said. “That’s what I love about wrestling because there’s something out there for everybody and AEW is something different, which is difficult to do in the wrestling industry. Wrestling has been around forever, and everybody has done everything before, but AEW has managed to keep it fresh and new and exciting. It was something that I really wanted to be a part of and I was hoping that I could. So, I kinda held out and crossed my fingers and hoped that I could be part of the roster and I’m fortunate enough to be a part of their roster and I’m excited.”

Having AEW as an option is something that Soho says she doesn’t take for granted. She feels indebted to those who helped create the company in its first years of existence and engineer the momentum that has allowed AEW to sign high-profile talent like CM Punk, Adam Cole and Bryan Danielson in recent weeks.

“Bryan Danielson said it best, that this company wouldn’t exist, we wouldn’t have anywhere to come, if it weren’t for the men and women that built this place,” Soho said. “I’m very grateful to them for building such an amazing product. It’s so great to see that this is a new chapter for AEW, as well. All Out, in my opinion, was one of the most historic pay-per-views in wrestling history. It was perfect, in my opinion, from top to bottom. And that’s not just me being biased because it was my debut, but it was amazing, and I think it was a statement-maker that AEW is going to be the brand to beat going forward.

As for her opponent in her first title match with the company on Wednesday night, AEW Women’s World Champion Britt Baker, Soho is effusive with praise.

“She is really, truly, incredibly talented,” Soho said of Baker. “One of the things that I’ve envied a lot about her is, regardless of whether or not she was injured and on the shelf or healthy, she was always [still] talking and making herself known and improving. Every time she’s stepped into the ring thereafter, I’ve seen improvement from her. I’ve known her long before AEW and long before I went to WWE. I knew her from the indies when she first started and to see the growth from her is very impressive.”

Beyond her match with Baker, Soho says she’s just grateful to be a member of the AEW women’s roster and this new stage in her career has rekindled the passion that made her get into the business in the first place.

“I honestly think this company is special for multiple reasons,” Soho said. “What I love about them is they really, truly care about their talent. They really, truly want to get to know their talent. They really, truly want to elevate every single person on the roster in one way or another. I’m very honoured that I have gotten the opportunities that I have and I’m very grateful. I’m ecstatic to be able to work with every female who’s on the roster and I hope to do that. I’m just excited to be in the ring again. I’m so glad that they’re allowing me to be able to wrestle and fall back in love with pro wrestling.”

Win or lose on Wednesday night, Ruby Soho knows she’s where she wants to be.