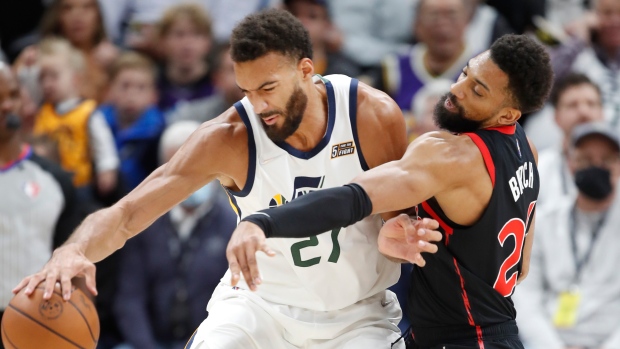 Gay also had five rebounds while playing just 18 minutes. He missed Utah’s first 14 games while recovering from offseason surgery on his right heel.

Birch gave Toronto an early spark, scoring all 14 of his points before halftime. He made back-to-back baskets to kickstart a 9-2 run that gave the Raptors a 23-17 lead in the first quarter.

Gay gave Utah an immediate lift even while playing on a minutes restriction. He made three three-pointers and assisted another basket to help the Jazz rally and take a 42-31 lead early in the second quarter.

VanVleet made three-pointers on three straight possessions to erase Utah’s lead and put the Raptors ahead 53-51 shortly before halftime.

The Jazz tightened up on defense in the third quarter, allowing them to create some separation. Toronto made only three baskets over the final nine minutes of the quarter. It opened the door for Utah to rebuild a double-digit lead.

Joe Ingles fed Gobert for a pair of dunks and drained a pair of three-pointers to fuel a 15-2 run that put the Jazz up 98-80 early in the fourth quarter.

Raptors: At Sacramento on Friday night.

Jazz: At Sacramento on Saturday night.