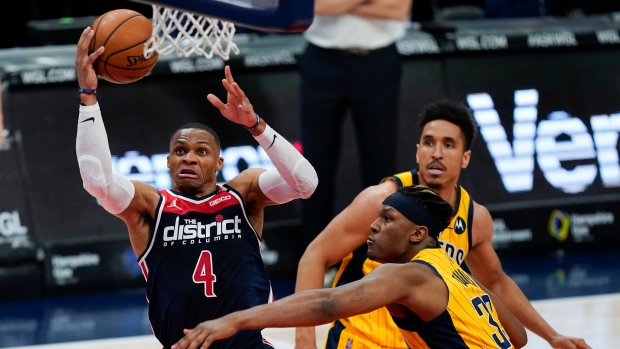 WASHINGTON — Russell Westbrook had 35 points, a season-high 21 assists and 14 rebounds for his NBA-leading 16th triple-double, helping the Washington Wizards to a 132-124 win over the Indiana Pacers on Monday night.

Westbrook also claimed the franchise career triple-double record in just his 38th game with the Wizards, this one coming while teammate and NBA leading scorer Bradley Beal sat out with a bruised hip. Darrell Walker had 15 triple-doubles in 283 games for Washington between 1987-1991.

“He does things that I’ve never seen,” Wizards coach Scott Brooks said of Westbrook, whom he also previously coached in Oklahoma City. “He’s a winner, man. He fights. He’s not perfect, and a lot of times the geniuses want to look at the things that he doesn’t do well. But sometimes they forget about the other things that he does well.”

Rui Hachimura scored 26 points and Chandler Hutchison had 18 in his debut with the Wizards, who won their second straight after losing eight of nine.

“Russ had quite a (few) assists to me, so I've definitely got to get him some dinner or something,” Hutchison said of Westbrook.

Domantas Sabonis had 35 points and 11 rebounds for the Pacers, who lost for the second time in six games.

Indiana entered in ninth place in the Eastern Conference, two games ahead of Chicago for the 10th and final play-in spot. The Pacers are now four games ahead of the Wizards, who began the day in 13th.

Malcolm Brogdon added 26 points for Indiana, which was outrebounded 55-37.

“Not good enough,” Brogdon said of the team performance. “They played harder. They made more shots and got more stops.”

Neither team led by more than six points until late in the final quarter.

Down six in the fourth, Westbrook and the Wizards outscored the Pacers 22-8 over the last 5:47, a stretch that began with a 13-0 run.

Westbrook's feed inside to Hachimura gave Washington the lead for good with 4:37 to play. He followed that with two spot-up 3s over Myles Turner, the latter from the right wing giving Washington its largest advantage to that point, 128-120, with 44.8 seconds to play.

“He shot it well from the arc today, and obviously everywhere, and passed it well,” Pacers coach Nate Bjorkgren said of Westbrook. “It was one of those games tonight that didn’t go our way in a number of ways.”

Pacers: Finished with a 5-5 record in 10 March road games. ... F Doug McDermott (right ankle) was ruled out pregame. ... F Justin Holiday picked up a flagrant foul with 8:39 to play in the third quarter on Jerome Robinson's 3-point attempt.

Wizards: Brooks said it's possible Beal could return for Tuesday's game. “We'll give him another day of rest and then know more tomorrow,” Brooks said of Beal. ... Robinson made his fourth start, in Beal's place.

Westbrook hit the Wizards franchise mark on another notable stretch when he grabbed Brogdon’s missed 3-pointer for his 10th rebound inside the final five seconds of the third quarter. Then he pushed up the floor and found Raul Neto for a buzzer-beating 3 that gave the Wizards a 95-92 lead and Westbrook his 18th assist.

“I don't deserve the credit, honestly,” Westbrook said of the feat. “I always give credit to the man above for blessing me with the ability to play, and along those lines, I have so many great coaches and teammates that make my job easy and help me out. Assists don't happen. I can't make the shots.”

HAZARDS OF A TRADE

Washington C Daniel Gafford, who was acquired with Hutchison from Chicago in a trade last Thursday, departed Monday's game early in the fourth quarter after he appeared to injure his right leg.

He required assistance from medical personnel to leave the court after scoring 11 points and grabbing six rebounds in 15 minutes.

“I mean it didn’t look good,” Brooks said of the 22-year-old Gafford, who also had a promising team debut on Saturday. “I’m really hoping for the best. What he brings, we haven’t had it in five years, the lob threat.”