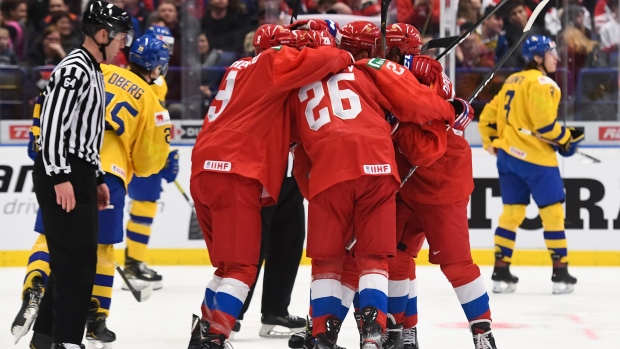 Ivan Morozov scored his second goal of the game at 3:24 of overtime Saturday to lead his country to a 5-4 victory over Sweden in the semifinals.

Yegor Sokolov added two goals of his own, while Alexander Khovanov scored and set up another for the Russians, who last won the event in 2011.

Yaroslav Askarov allowed four goals on 20 shots before getting the hook in the third period. Amir Miftakhov made five saves in relief to secure the win.

"It's just unbelievable," said Sokolov, who plays for the Cape Breton Screaming Eagles of the Quebec Major Junior Hockey League. "We played together since (under-16s) and we never won anything.

Canada, which was embarrassed 6-0 by Russia in the preliminary round, beat defending champion Finland 5-0 in the other semifinal later Saturday at Ostravar Arena. The gold- and bronze-medal games go Sunday.

Rasmus Sandin had two goals and two assists for Sweden, which saw star forward Nils Hoglander ejected for a hit to the head early in the first period.

Samuel Fagemo added a goal and an assist, while Nils Lundkvist also scored. Hugo Alnefelt made 39 stops and Linus Nassen chipped in with two assists.

Morozov won it after blowing past Sandin, who barely left the ice in the 3-on-3 extra period, as the Swedes were changing before firing his second of the tournament under Alnefelt's arm.

Sandin played a game-high 24 minutes 38 seconds, including 1:56 of overtime.

"Too bad I couldn't help the team a little bit more," said the frustrated Toronto Maple Leafs prospect, who tossed his helmet aside after being named his country's player of the game. "I'll take (the winning goal) on me a little bit, but it is what it is."

Tied 3-3 through 40 minutes, Sweden pushed ahead at 4:24 of the final period when Lundkvist scored his team's third power-play goal of the game to end Askarov's afternoon.

Sokolov chipped his second of the game from a tight angle upstairs on Alnefelt at 8:35 to tie it up.

Russia, which has captured only one gold medal since winning back-to-back world junior titles in 2002 and 2003, lost to Sweden in the 2012 final before falling to Canada in 2015 and Finland in 2016.

The Swedes, meanwhile, have won 52 straight games in the preliminary round dating back to the last time the Czech Republic hosted the event in 2008, but have topped the podium just once during that span.

Sweden jumped ahead 16 seconds into the first when Sandin snapped a quick shot over Askarov's glove.

Selected 29th overall at the 2018 NHL draft, Sandin took healthy slashes on his left wrist in back-to-back games coming into Saturday, including one in Thursday's 5-0 victory over the Czechs in the quarterfinals that had the Swedes convinced their star defenceman was being targeted.

Russia tied it on a power play at 3:04 when Morozov took a pass from Vancouver Canucks prospect Vasili Podkolzin and beat Alnefelt through the pads.

Hoglander, another Canucks pick and the tournament's leading scorer with five goals and 10 points coming into Saturday, was then assessed a five-minute major and a game misconduct for a check to the head on Russian captain Grigori Denisenko.

Khavanov gave his team the lead on the ensuing man advantage at 5:40 before showboating by the Swedish bench in celebration.

Alnefelt then made a horrendous mistake on a botched clearing attempt that fell right on the stick of Sokolov, and he scored from a tight angle with the netminder desperately trying to scramble back into his crease at 12:05.

The goal-fest continued on a Swedish power play when Fagemo ripped his tournament-leading seventh past Askarov's blocker with 5:06 left in the period to make it 3-2.

The Russian goalie was bailed out late in the period by Danil Zhuravlyov when the defenceman fished the puck off the goal line after Askarov completely whiffed on a save.

Sandin scored his second of the game — and second of the tournament — on a power play at 11:02 of the second when he blasted a one-timer through a screen to make it 3-3.

Alnefelt shook off his earlier gaffe to make a number of big stops in the middle period, including an outstanding save on Kirill Marchenko with the blocker on a Russian man advantage to keep things tied through 40 minutes.

This report by The Canadian Press was first published Jan. 4, 2020.