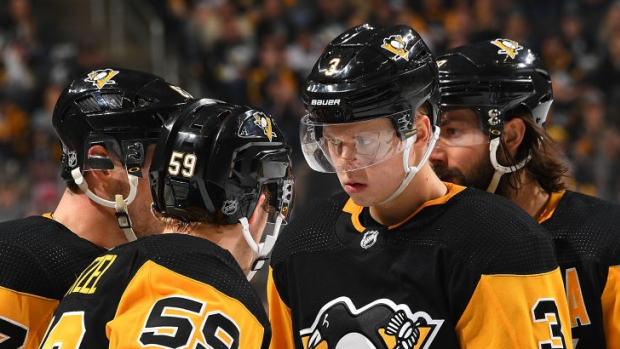 Pittsburgh Penguins general manager Jim Rutherford said after his team was swept in the first round by the New York Islanders that changes would likely be coming to the roster.

He went further into detail on potential changes Monday, telling the Pittsburgh Post-Gazette he expects to trade at least one defenceman this summer.

“It’s good to be in the position we’re in,” Rutherford said. “We’re in a stronger position now than we were a year ago or maybe even a couple years ago.

“But it will be difficult to keep all of our defencemen and keep them happy. I’m sure with the amount of teams who are looking for defencemen, we’ll have to move at least one.”

The Penguins have six of the nine defenceman from their playoff roster under contract for next season, with Marcus Pettersson scheduled to hit restricted free agency.

Of the six blueliners under contract - Kris Letang, Justin Schultz, Brian Dumoulin, Olli Maatta, Erik Gudbranson and Jack Johnson - Jason Mackey of the Post-Gazette believes Maatta is the most likely candidate for a trade.

As Mackey notes, Maatta dressed only in Game 1 of the team's first-round series and is a left-hand shot, which the Penguins currently have an excess of.

The 2012 first-round pick has 25 goals and 107 points in 362 career games with the Penguins. He is a two-time Stanley Cup champion and contributed two goals and eight points in 25 games in the team's run to the Cup in 2017.