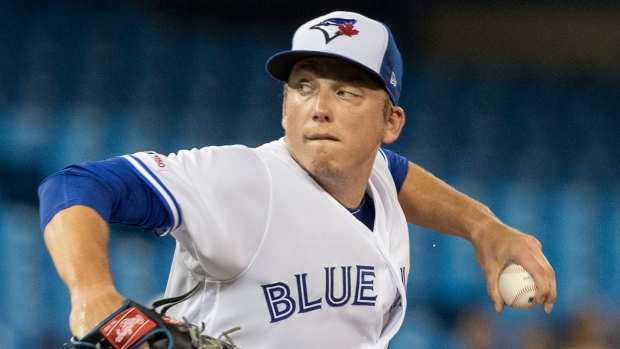 DUNEDIN, Fla. — The rotation talent assembled by Ross Atkins & Co. is undeniably leaps and bounds better than a year ago.

On the bright side, it’s a group with an interesting blend of upside and big-league resumes.

The downside is just about all of them come with iffy track records of health.

The latter emerged as an early spring storyline on the second day of Toronto Blue Jays pitchers and catchers getting their work in when it was revealed Ryan Borucki has been shut down for at least a week with left elbow tightness.

Even though it’s being described as precautionary at this point, it’s still an ominous sign for the 25-year-old southpaw with a long history of elbow issues.

“Through my throwing program [this off-season] I’ve been feeling pretty good but I didn’t feel 100 per cent, so I just let them know, ‘Hey, I’m not feeling 100 per cent,’” Borucki said Friday, adding he first felt the tightness playing catch a couple of weeks ago.

“It’s, basically, just minor tightness and they wanted to knock out all that tightness before I really start ramping up for games. Basically, all precautionary. Not like last year. It’s nothing like last year. I know the difference between those kinds of things. It’s going to be five, six days rest and then go ramp back up. It should be pretty minor.”

Arm problems aren’t new for Borucki and neither is mentally downplaying the early warning signs.

Drafted in 2012 despite a partially torn UCL, Borucki eventually succumbed to Tommy John surgery, wiping out his 2013 season.

A sore shoulder limited him to just 5.2 innings in 2015, before healthy 2016 and 2017 seasons revived his prospect stock and put him on the big-league radar.

But the elbow problems reappeared last March — he was originally supposed to miss just two starts, but didn’t end up getting back on a mound for months — and Borucki eventually found himself on a surgeon’s table in August to have a bone spur removed from the back of his elbow, ending his season after just two big-league starts.

At the time, there was some concern within the organization that Borucki would need a second TJ surgery.

“We're going to be cautious,” Atkins said Friday morning at TD Ballpark. “It's just smart to do that because he has a history of elbow issues.”

Borucki was one of a handful of candidates vying for the fifth and final rotation spot behind the quartet of Hyun-Jin Ryu, Matt Shoemaker — two pitchers with multiple IL stints on their respective resumes — Tanner Roark and Chase Anderson.

Japanese right-hander Shun Yamaguchi, who is intriguing as a Swiss Army knife out of the bullpen, should probably be considered the front-runner since the team promised the 32-year-old a chance to start, but Trent Thornton is also firmly in the mix after making 29 starts as a rookie last year.

A healthy Borucki would be right alongside that group, but that’s in question for the time being.

Jacob Waguespack, who made 13 starts as a rookie last season, Anthony Kay, T.J. Zeuch, Thomas Pannone and Sean Reid-Foley will also be trying to push their way into the picture over the next five weeks.

“It’s February,” Borucki said. “Don’t really want to push myself and hurt myself like I did in mid-March and have to sit out the whole season again.

“I’m more worried about staying healthy for the whole year. If I’m not ready by the end of spring training, it is what it is and I’ll have to go where I need to go [other than Toronto for opening day[. But I just want to be healthy for the whole season. I’m not going to push myself to rush to try to get back and end up hurting myself again. I’m no good on the training table, I’m better on the field.”

A handful of the young arms will eventually be transitioned into relievers, and Borucki’s continuing elbow woes have turned him into a logical candidate.

Whether a lighter workload would help keep him healthy is up for debate, as the up-and-down and unpredictable nature of relief work doesn’t exactly make it easier on a pitcher’s arm, either, in some cases.

“I think, at some point, for sure,” Atkins said when asked if they’d consider moving Borucki to the bullpen. “It's not something that is on the table to make a decision today. Today we're focused on him getting back to 100 per cent strength.”

Borucki didn’t exactly bristle at the notion and he said the organization hasn’t approached him about it, but he made it quite clear he wants to remain a starter.