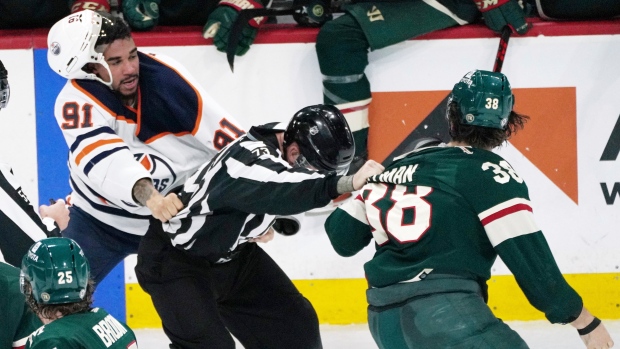 Minnesota Wild forward Ryan Hartman has been fined $4,250 for unsportsmanlike conduct after he flipped off Edmonton Oilers winger Evander Kane in the Wild's 5-1 blowout win over the Oilers on Tuesday.

As the two were being escorted off the ice by officials following a scrum, Hartman flipped off Kane. The 27-year-old, who is signed through 2023-24 at a cap hit of $1.7 million,  said post-game that any fine that comes from that action would be "well worth it."

Minnesota’s Ryan Hartman has been fined $4,250, the maximum allowable under the CBA, for Unsportsmanlike Conduct during last night’s game against Edmonton.

Kane and Hartman were both given 10-minute misconducts in addition to each receiving a roughing minor and Kane receiving an additional cross-checking minor with less than 10 minutes remaining in Tuesday's game.

The incident started when Kane cross-checked Kirill Kaprizov after the Wild star engaged with Kailer Yamamoto, who was without the puck, at the Wild blueline. Multiple members of the Wild rushed in on Kane, who traded jabs with players in the scrum. Hartman leaped at Kane while he was engaged with Mats Zuccarello. The two then attempted to throw punches while being restrained by linesman before being separated.

“He gave Kirill a shot from behind in a very vulnerable spot,” Hartman said of Kane. “It goes to show, we had five guys in there. They didn’t have one guy in there to help him."

Kane responded with his own thoughts on Hartman jumping in on the action after the officials were already involved.

"It took all five guys and they couldn't bring me down," Kane said. "It's something, I definitely would have liked to get loose, put it that way.

"These little guys, they wanna act tough but they wait for the linesman to come in. There's your quote guys."