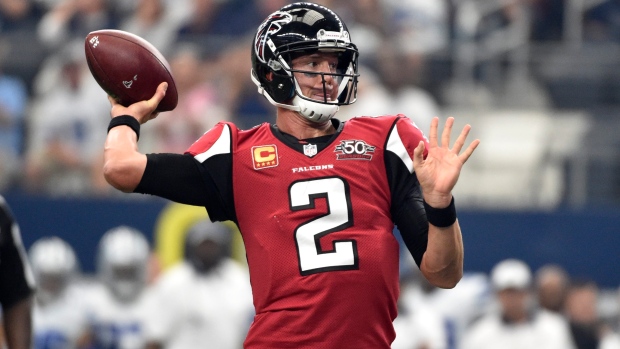 ARLINGTON, Texas - Julio Jones glided over the goal line on a diving touchdown. That quieted a Dallas crowd riled up by early hopes that the Cowboys might find a way to survive without Tony Romo and Dez Bryant.

Fill-in Atlanta running back Devonta Freeman did most of the rest of the silencing.

Matt Ryan connected with Jones for two touchdowns, Freeman ran for 141 yards and three scores starting for injured rookie Tevin Coleman, and the Falcons beat the Cowboys 39-28 on Sunday.

"We just want to move the ball — I don't care how we do it," said Freeman, who also had 52 yards receiving. "Run, pass, if we get three points on a field goal, as long as we move the ball and get points."

Freeman's third score early in the fourth quarter capped a rally from a trio of 14-point deficits for the Falcons (3-0), who didn't win their third game until Week 10 last year, and Week 13 in 2013.

Jones had his third straight 100-yard game to start the season, finishing with 164 and a clinching 2-yard score late in the fourth. According to the NFL, Atlanta is the first team to start 3-0 after trailing in the fourth quarter of each game.

"We clearly got punched in the mouth and we were looking to respond," said Dan Quinn, who joined Jim Mora (2004) as the only Atlanta coaches to start their careers with three straight wins. "Dallas certainly had us reeling all the way through and we had to battle like crazy to get back in it."

The Cowboys (2-1) had a six-game winning streak in the regular season snapped in backup quarterback Brandon Weeden's ninth straight loss as a starter going back to his two-year stint in Cleveland.

With Romo watching with a sling supporting his broken left collarbone, and Bryant also in street clothes because of a broken right foot, Weeden started 9 of 9 to push his streak of completions to 16 to start the season.

But the run ended with a second-quarter interception that turned the game in the Falcons' favour.

"We did a lot of really good things," Weeden said. "Maybe not so much in the second half."

Dallas running back Joseph Randle had 85 yards on his first three carries, including a 37-yard touchdown that helped the Cowboys to a 14-0 lead. He had just 2 yards on his final 11 runs, and the Cowboys had just three first downs in the second half after getting 20 before halftime.

Freeman, who started with Coleman battling a rib injury, had no trouble with the league's No. 1 rushing defence, getting 89 yards in the second half as the Falcons scored touchdowns on three straight possessions to overcome a 28-17 deficit. Atlanta was 9 of 14 on third down.

"When you are rolling on a third down, and you're running the ball effectively, that's when you get into a mode offensively where you think, 'No matter what happens, we're going to find a way,'" said Ryan, who was 24 of 36 for 285 yards without an interception.

The Falcons gave themselves a boost by driving to Matt Bryant's 32-yard field goal in the final 40 seconds of the first half to get within 11, the key play a 35-yard pass to Freeman to get into field goal range.

Weeden's ill-advised throw while scrambling to his left was easily intercepted by William Moore, putting the Falcons on the Dallas 23. Freeman's second score pulled them within a touchdown in the second quarter.

While Weeden rarely looked downfield after that turnover, Ryan and Jones got going after a slow start.

Jones had 137 of his yards in the second half, including a 45-yard catch-and-run touchdown that ended with a dive as he turned upside down and held the ball over the goal line in his outstretched arm. A 2-point conversion pulled Atlanta within 28-25.

Weeden was 22 of 26 for 232 yards, but Cole Beasley was the only receiver to catch a pass. Randle finished with 87 yards rushing and three touchdowns, matching his total from last season when he was NFL rushing champion DeMarco Murray's backup.

NOTES: Atlanta TE Jacob Tamme didn't return after leaving in the first half with a head injury. ... Dallas RB Lance Dunbar had 10 catches for 100 yards, but several were futile attempts to get first downs in third-and-long situations.