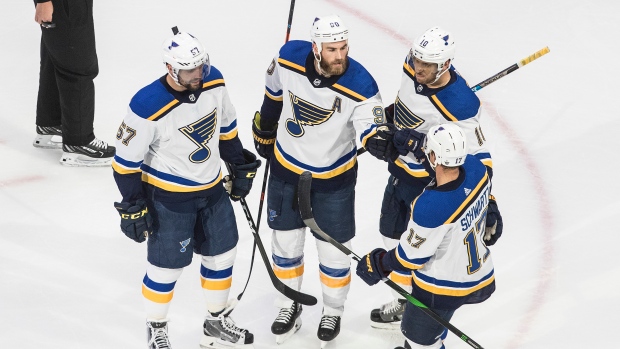 EDMONTON — The St. Louis Blues battled-tested vets gave the Vancouver Canucks a lesson on playoff resiliency Monday, shutting down the Canuck power play and fixing their own to draw even in their NHL playoff series.

Ryan O'Reilly scored twice and added an assist for the Blues in a 3-1 win at Rogers Place to give them their second consecutive win and tie the best-of-seven series at two games each.

"It was nice to get on the board tonight," said O'Reilly.

"I haven't been creating much offensively, so it was nice to put the puck in the back of the net, but it's just one game. I've got to be consistent with it."

The teams were playing on a quick 24-hour turnaround. The Blues beat the Canucks 3-2 late Sunday night in overtime.

They outshot the Canucks 37-23, scored two goals with the man advantage to turn around what had been an abysmal 2-for-11 power play going into Game 4.

Most importantly, they shut down a Canuck power play that had torched them for six goals in the first three games, but went 0 for 7 on this night.

"When we take care of the puck it's effective and it's hard on them," said O'Reilly.

"I think it was nice with an obviously emotional win last night. (We were) feeling good coming back into the rink again today and going right to our game again. I think that was a big factor. Obviously a lot of work left. We've got to stick to our structure."

Pietrangelo said they've been working on fixing the penalty kill.

"We've been making adjustments as we go, just based on what they do," he said.

"Big thing for us is clearing the puck when he have an opportunity, so we were much better at that tonight."

Jake Allen made 22 saves in net for the win and Jacob Markstrom stopped 34 for the loss.

J.T. Miller had the lone Canucks marker, his fourth of the post-season.

He said the Blues are adapting to their power play,

"They're blocking a lot of shots, they're studying us. They kind of know what we're doing," said Miller.

He said they'll make adjustments but aren't going to go back to square one.

"It's not like we're getting our butts whupped up and down the rink. They're a good team. We're a good team. It's going to be a hard, long series. We signed up for that."

The Canucks have not been in the playoffs since 2015 and many on the roster, including key players Elias Pettersson, Markstrom, Brock Boeser and Quinn Hughes, are getting their first taste of the rigours of the NHL post-season.

O'Reilly, last year's Conn Smythe Trophy winner in the cup run, scored late in the first period on the power play — the first time the Blues have opened the scoring in the series.

Pietrangelo whistled a slapshot that missed the net, but the puck caromed straight back off the backboards to O'Reilly, who put it under the crossbar.

Vancouver tied it just 40 seconds into the second period. Alex Edler wristed the puck from the blue line and Miller redirected it in.

St. Louis then took control, outshooting the Canucks 17-5 in the period.

O'Reilly took a pass out of the corner from Perron, walked out in front of the net and flicked a backhander into the top corner. The Blues then caught a break on a two-man advantage. Pietrangelo zipped the puck through traffic in the crease. The puck hit Edler's stick and in.

O'Reilly has three goals in the series. Perron recorded two assists and has registered a point in every game this series (two goals, four assists).

Allen started for the second consecutive game for St. Louis, replacing Jordan Binnington. Markstrom has played every minute for the Canucks through eight post-season games.

Vancouver captain Bo Horvat was kept off the scoresheet for a second consecutive game after lighting up the Blues for two goals in each of the first two contests.

Hughes also saw his streak snapped. The Calder candidate was going for a point in his seventh consecutive post-season game. The 20-year-old has one goal and eight assists.

All Western Conference games are being played in front of no fans at Rogers Place. The players are being kept isolated in a so-called bubble between games to prevent contracting COVID-19.

This report by The Canadian Press was first published August 17, 2020.