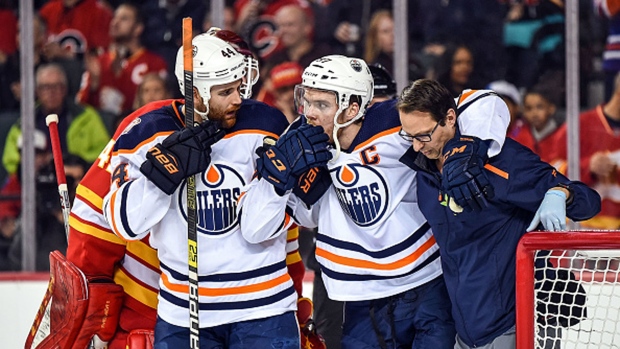 What more do you know about Connor McDavid’s knee injury and his decision of rehab over surgery?

“After speaking with someone in Connor McDavid’s camp, it’s clear that McDavid had a massive decision that he was faced with roughly 10 days after the injury occurred. The initial specialist gave them the recommendation of major reconstructive surgery on his PCL. That surgery, had he elected to do it, would have cost him the entire 2019-20 season. It would have involved grafts, it would have involved screws and could have fundamentally changed the way that McDavid’s knee worked and potentially the way that he skated. So after getting that initial diagnosis they went in search of other opinions. They talked to three other doctors and gathered all sorts of opinions and that’s where the option of rehab over surgery first came up.

"And as we know that the decision that McDavid made. But it wasn’t without his risk. There was no guarantee that the PCL would heal properly on its own. But through a strict regimen of stabilization, diet, exercise and rehab, we do know that the PCL has entirely healed and that McDavid is showing in the results this season just how he is back to 100 per cent.”

Looking back there was very little information about his injury. Why do you think they were so guarded?

“Yeah you know they really went to great lengths to keep this information under wraps. You know I think there was some concern that if the severity of the injury got out and you know terms like reconstructive surgery were out there, there would be a lot of speculation about McDavid’s future in the game if he would ever be the same player again. I think they felt that they would face an avalanche of questions. Obviously McDavid is as high profile player as it gets and so they made the decision to try and keep it under wraps. Keep in mind that the real information about the injury didn’t get to them until McDavid had already left Edmonton and was essentially gone for his summer.

"But it does make a little more sense to me though now in retrospect. McDavid showed up at training camp and he was pretty stressed out. He was very reticent to talk about the knee injury and at times was visibly agitated when he was asked questions about it. Sometimes he would give us one or two-word answers and it never really made sense based on the information we were being given about where the recovery was at. So now in retrospect, you understand everything he was up against, the risk that he was taking and what he was facing. It makes a little more sense the tension that was coming off from McDavid back in camp.”

Some additional info on McDavids knee injury in more detail than a simple tweet allows. pic.twitter.com/6OWRe1nH8a