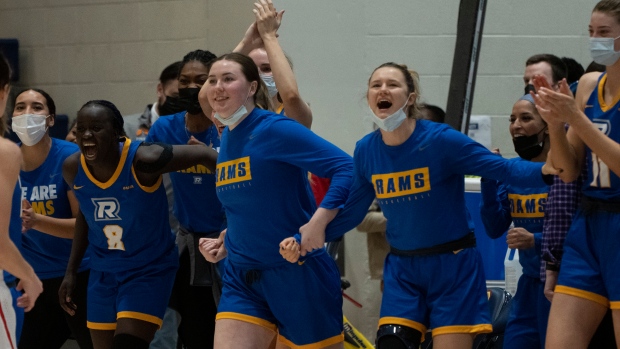 KINGSTON, Ont. — Jama Bin-Edward scored a game-high 17 points to lead the Ryerson Rams into the U Sports women's basketball championship game with a 64-56 overtime victory over the Brock Badgers Saturday afternoon.

The win has kept Ryerson's hope of an undefeated season alive.

Madalyn Weinert of St. Catharines, Ont., and Ottawa's Victoria Lawrence led the way for Brock, finishing the game with 14 points each.

Lawrence was instrumental for Brock, scoring seven points in the fourth quarter to help the Badgers come back from being down five after three quarters.

A three-pointer from Lawrence actually gave Brock a 54-52 lead with 1:28 left to play, but Ryerson's Stefanija Mrvaljevic, a Mississauga, Ont., native, hit a shot with 1:07 left to play in the fourth to send the game to overtime after Lawrence missed a couple go-ahead basket opportunities.

In the extra period, Bin-Edward took over, scoring seven points, including five straight to start the overtime.

The Rams will look to finish off their run of the table when they compete for the national championship on Sunday.

They will face the winner of the Queen's-Winnipeg match that will conclude later on Saturday.

This report by The Canadian Press was first published April 2, 2022.