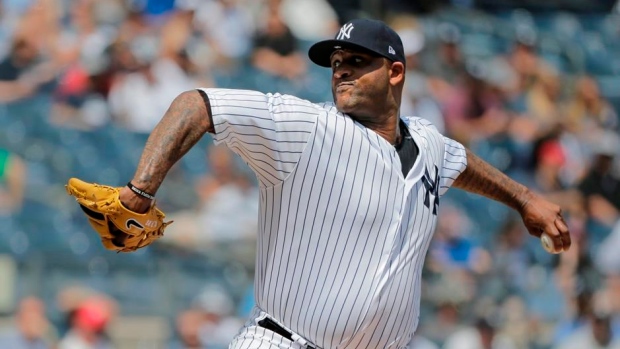 TAMPA, Fla. — New York Yankees left-hander CC Sabathia has returned to the mound for the first time since undergoing a heart procedure in December.

Sabathia allowed one run and two hits over two innings on Thursday in a minor league exhibition game, striking out three for Triple-A Scranton/Wilkes-Barre against Toledo, Detroit's Triple-A affiliate.

Sabathia, who has announced he's retiring after the season, said he "felt great" after his 26-pitch outing.

"No problems. I felt like the ball was coming out of my hand pretty good. All positive," Sabathia said.

Tigers centre field prospect Daz Cameron, the son of former major leaguer Mike Cameron, had a first-inning double and Hector Sanchez hit an opposite-field homer to right during the second. Sabathia will make another minor league appearance on Tuesday against Philadelphia Phillies prospects. He expected to miss his first two or three regular season starts.

The 38-year-old had a stent inserted this winter after a blockage was found in an artery from his heart. He has had chronic right knee problems that required several operations. Sabthia also has a five-game suspension pending for hitting the Tampa Bay Rays' Jesus Sucre with a pitch in his final start last season.

Yankees guest instructor Lee Mazzilli was expected to spend a second night in the hospital after being struck in the head by a ball during batting practice Wednesday.

Yankees spokesman Jason Zillo talked Thursday with Mazzilli's wife, who said Lee is improving and is appreciative and humbled by all the people who have reached out to him.

Mazzilli was hurt during a workout at New York's spring training complex at Steinbrenner Field for Yankees players not on the travel roster for a two-day trip to West Palm Beach and Jupiter.

NOTES: Two-time All-Star Gio Gonzalez, signed to a minor league contract on Wednesday, is scheduled to pitch for the Yankees on Saturday. ... First baseman Greg Bird was scratched from Thursday's road game against St. Louis due to right elbow soreness. He was hit by a pitch on Wednesday. ... The Yankees reassigned OF Billy Burns, OF Matt Lipka and C Ryan Lavarnway to minor league camp.