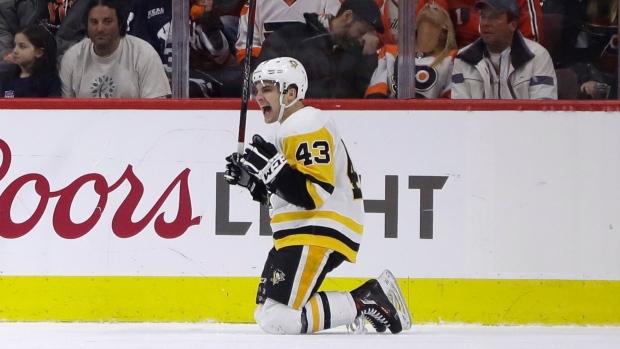 The Buffalo Sabres have acquired left winger Conor Sheary and defenceman Matt Hunwick from the Pittsburgh Penguins for a conditional 2019 fourth-round draft pick. According to TSN Hockey Insider Darren Dreger, the pick can become a third-round pick.

This clears $5.25M off the books for PIT, allows them to take a run at the UFAs they've been kicking tires on but haven't had the money to really go after. https://t.co/SzIybHUFAW

After scoring 23 goals and 30 assists in 61 games two seasons ago, Sheary took a bit of a step back last year, posting 18 goals and 12 helpers in a career-high 79 games. He had zero goals and two assists in 12 playoff games as the Pens fell to the Washington Capitals in the second round.

Sheary is set to enter the second year of a three-year, $9 million deal that carries a cap hit of $3 million per season.

He was signed in July of 2015 as an undrafted free agent.

The 26-year-old is a native of Winchester, Ma.

Hunwick, 33, scored four goals and added six assists over 42 games with the Penguins in 2017-18. He didn't appear in any playoff games.

The American has 25 goals and 92 assists over 521 career games with the Boston Bruins, Colorado Avalanche, New York Rangers, Toronto Maple Leafs and Penguins.

Hunwick is entering the second year of a three-year, $6.75 million contract that carries a cap hit of $2.25 million.