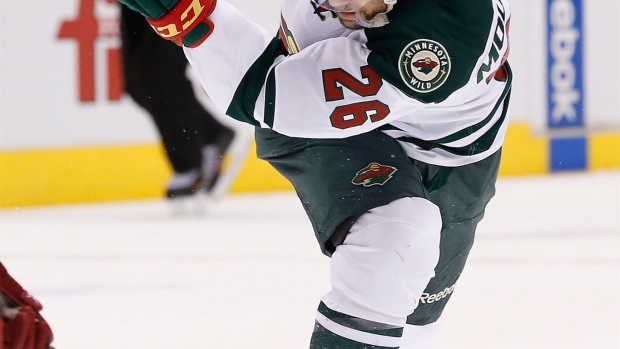 No financial terms were disclosed, but Gionta's pact is reportedly worth $12.75 million, while Moulson is in line to receive $25 million over five years according to multiple sources.

Gionta spent the last five seasons with the Habs, and the last four as the designated team leader. He picked up 18 goals and 22 assists over 81 regular- season appearances, but slowed a bit in the playoffs with six assists and seven points over 17 contests.

The 35-year-old native of Rochester and Boston College product, who is a two- time All-Star selection and won a Stanley Cup with New Jersey in 2003, has logged 776 games of NHL experience and recorded 249 goals with 485 points.

Moulson returns to western New York after a brief sojourn in the upper Midwest.

Acquired by the Sabres from the Islanders for Thomas Vanek in late October, he totaled 11 goals and 29 points in 44 games before a trade-deadline deal landed him in Minnesota. Moulson contributed 13 points in 20 regular-season appearances and three points over 10 playoff games for the Wild.

Heading into his eighth NHL season, the 30-year-old Toronto-area native has racked up 141 goals and 134 assists for four clubs.

Also announced in the early hours of the free agency period, was forward Cody McCormick agreeing to a multi-year contract and the signing of forward Marcus Foligno to a two-year deal.

The 31-year-old McCormick also returns to Buffalo, having spent his first 29 games of last season there while tallying a goal and four assists. He was sent to Minnesota in the Moulson deal, then finished the year with a goal and assist in 14 games with the Wild. Over 372 games for three clubs since 2003, the Ontario native has compiled 20 goals and 41 assists.

Foligno posted seven goals and 19 points with a minus-17 rating in 74 games for the Sabres last season, his first full NHL campaign. In 135 games since 2011, the 22-year-old Buffalo native has collected 18 goals and 32 assists.

Another addition later in the afternoon was defenseman Andrej Meszaros, who was inked to a one-year deal. The 28-year-old native of Slovakia split last season with the Flyers and Bruins, picking up seven goals and 22 assists in 52 appearances.

Since arriving in Ottawa for the 2005-06 season, the left-handed shooting blueliner has totaled 56 goals and 168 assists over 585 contests for the Senators, Lightning, Philly and Boston.