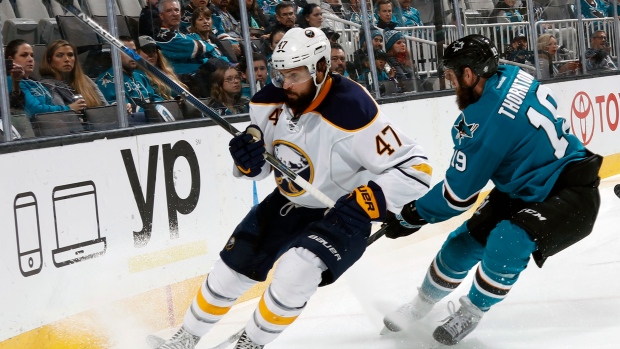 The Buffalo Sabres announced on Friday that Zach Bogosian will undergo hip surgery next week with an estimated recovery time of four to six months.

This rules out the 27-year-old defenceman for the remainder of the season with the team expecting Bogosian to be ready for training camp in the fall.

The procedure has an estimated recovery time of 4-6 months. As a result, Bogosian will remain on injured reserve for the duration of the season, but is expected to be ready for the start of 2018 training camp. pic.twitter.com/PbnvZOv4Sy

"The news regarding Zach’s injury is unfortunate," Sabres general manager Jason Botterill said in a statement. "Zach has been dealing with this injury since the beginning of the season. After consulting with our medical team, we felt that it was important to get this taken care of now so that he can be back to full strength and ready to contribute at the beginning of next season."

On Jan. 10, Bogosian was checked into the boards by teammate Evander Kane during a practice. Though Bogosian stayed on his feet, he fell to the ice moments later and had to be helped to the locker room when he was unable to put weight on his left leg. The hit led to a heated moment between Kane and Justin Falk.

Bogosian has not played since that practice.

A native of Massena, N.Y., Bogosian is in his 10th NHL season and third with the Sabres after being acquired - along with Kane - in a midseason blockbuster trade with the Winnipeg Jets near the 2015 trade deadline that saw Tyler Myers go the other way.

In 18 games this season, Bogosian recorded an assist.

Taken with the third overall pick of the 2008 NHL Entry Draft out of the Ontario Hockey League's Peterborough Petes by the Atlanta Thrashers, Bogosian has appeared in 552 career games with the Thrashers, Jets and Sabres, tallying 49 goals and 121 assists.