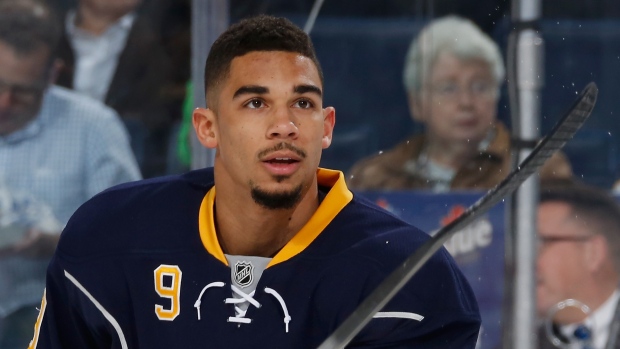 BUFFALO, N.Y. - Buffalo Sabres forward Evander Kane is the subject of a sex offence investigation by Buffalo police, the team confirmed in a statement Sunday.

"We take the allegation made today against Evander Kane very seriously," the Sabres said in the statement. "We are gathering facts and have been in touch with the NHL and Evander's representatives. Until we have more information we will not have any additional comment."

The NHL released a similar statement, saying: "We are aware of and are monitoring the investigation involving Buffalo Sabres forward Evander Kane. We will have no further comment at this time."

The Buffalo News, citing unidentified police sources, said Kane is being investigated for an alleged incident Sunday morning in a downtown hotel room. The newspaper said Kane hasn't been charged, and police officials would confirm only that there is an ongoing investigation.

A police spokesman and Kane's agent, Craig Oster, did not return messages left by The Associated Press.

The 24-year-old Kane had a goal Saturday night in the Sabres' 6-3 victory in Boston. He has eight goals and five assists in 25 games this season.