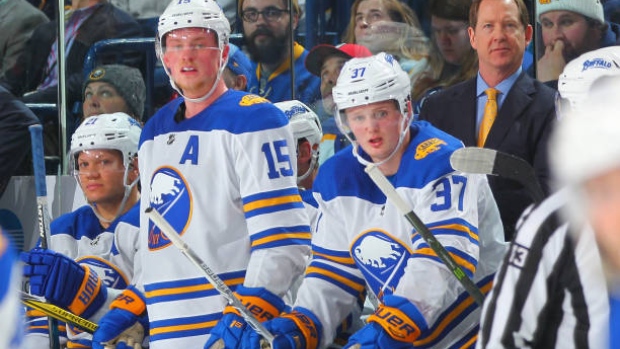 BUFFALO, N.Y. — Having known mostly success over the past decade with the Penguins, Jason Botterill received a sobering introduction to life at the bottom of the NHL during his first season as Buffalo Sabres general manager.

"I've been here for one year and I was pretty (ticked) off and upset," Botterill said during a season-ending news conference Wednesday, "I guess I could be articulate, but I'll just say it (stinks) that we won't be watching live playoff hockey right now."

Being on the outside looking in is an unusual position for Botterill, who spent the previous two Junes celebrating Stanley Cup championships as the Penguins assistant GM. He was hired last spring after the Sabres cleaned house by firing GM Tim Murray and coach Dan Bylsma.

If there's anything Botterill can draw upon from his experience with the Penguins, is seeing the notable difference between what makes up a winning organization and a losing one in Buffalo .

The Sabres finished last for the third time in five years, and extended their franchise-worst playoff drought to a seventh season.

"Right now we have a losing culture here," Botterill said.

He put the onus on himself, coach Phil Housley and players to find ways of inspiring change, be it with their training habits or communication and leadership abilities.

"I don't want to hear how disappointed they are. I want to hear what's going to change," Botterill said. "It just can't be about words. We have to have better results."

Botterill backed the disheartening sentiments expressed by centre Ryan O'Reilly during the team's final media availability on Monday. O'Reilly said a losing mentality had crept into the locker room and led him to losing his love for playing hockey at times.

"I think he gave you an honest opinion. And in today's sports world that's a little bit unique," Botterill said.

"When you don't get the results you want, it can be really draining on a player," he added. "And what he said is probably indicative of a lot of our players within our organization. And that's what we have to work through right now."

Botterill began the news conference by saying Housley isn't going anywhere after he struggled in his first year as coach. He credited Housley for developing some of Buffalo's youngsters, and believes in the up-tempo style the coach began introducing this season.

As for the roster, Botterill didn't rule out making drastic changes even if it meant shaking up the team's core group of leaders.

"When you finish where we were, you have to look at everything," he said.

Buffalo finished last in the NHL with 199 goals scored and 119 goals scored in five-on-five situations. The Sabres also matched a franchise low for home wins in any season by going 11-25-4 at Buffalo — not including an overtime loss to the Rangers in the Winter Classic at New York City in which the Sabres were the "home" team.

If there was a bright side, Botterill looked forward to the draft in June, when Buffalo is guaranteed picking no worse than fourth overall, pending the results of the NHL's draft lottery on April 28.

Botterill was impressed by Jack Eichel's development on the ice, where the third-year centre set career bests with 25 goals and 64 points, and off the ice in continuing to mature as a leader.

Botterill, however, said it was premature as to whether the Sabres were prepared to award the 21-year-old Eichel the captaincy, a role that was not filled this past season.

"As excited as we are of Jack moving forward as a leader, it's imperative that we have more players in that locker room step up," Botterill said.

"This game cannot have one player lead the entire team. It's imperative that we have stronger leadership bases in there."

NOTES: Botterill said G Robin Lehner will not require surgery after the starter visited a specialist this week to assess a lower body injury. ... In announcing he expects rookie G Linus Ullmark to play for Buffalo full time next season, Botterill said he's not determined his second goalie, including Lehner, who is eligible to become a restricted free agent. ... Backup Chad Johnson completed his one-year contract and is eligible to become an unrestricted free agent.