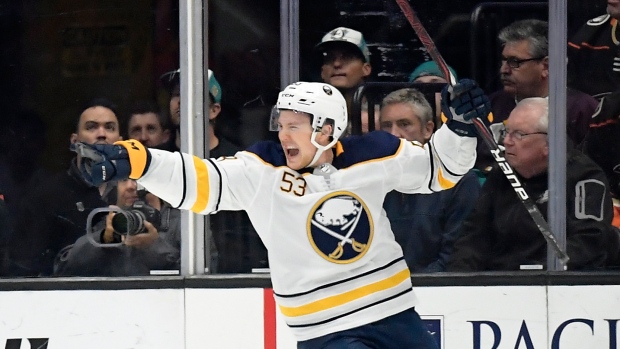 Buffalo Sabres star winger Jeff Skinner is slated to become an unrestricted free agent for the first time in his career on July 1, however the two sides are expected to start talking about a contract extension in and around the holidays next month, according to TSN Hockey Insider Pierre LeBrun.

Regarding pending UFA Jeff Skinner, on fire for the Sabres, there haven't been any contract talks yet but the expectation is that both sides will start chatting in and around the holidays next month and see where it goes from there...

The Sabres acquired Skinner from the Carolina Hurricanes this past summer for forward prospect Cliff Pu and three draft picks. Since he was acquired in the off-season, Skinner can't sign a max eight-year deal with the Sabres until after the trade deadline on Feb. 25. He can, however, ink a contract  up to seven years at any point.

The Toronto native is off to a strong start in Buffalo, netting 15 goals and eight assists over 22 games. Skinner, the seventh overall pick in the 2010 draft, has 219 goals and 183 assists over 601 career games with the Sabres and Hurricanes.

Buffalo holds a 14-6-2 record and sit third in the Atlantic Division through 22 games.