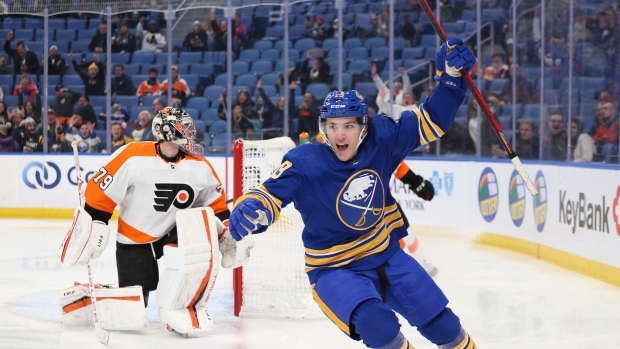 BUFFALO, N.Y. (AP) — Jeff Skinner, Tage Thompson and Peyton Krebs each scored twice, and the Buffalo Sabres handed Philadelphia its 11th consecutive loss with a 6-3 victory over the Flyers on Saturday.

Philadelphia’s skid (0-8-3) matches the Arizona Coyotes and New York Islanders for the longest in the NHL this season. It is one short of the franchise record of 12 straight losses set in 1999. The Flyers are the first team in 11 years to lose 10 in a row twice in the same season.

“Right now it feels like we’re hitting rock bottom, and it just feels like we can’t catch a break,” said Flyers captain Claude Giroux, who tipped in two goals.

Rasmus Dahlin and Alex Tuch each had two assists for the Sabres, who ended a nine-game home slide. Michael Houser made 30 saves to win his second consecutive start and improve to 4-2.

The short-handed Sabres were without alternate captains Kyle Okposo and Zemgus Girgensons, among 10 players on the injured list.

“I challenged our guys from a leadership perspective,” Sabres coach Don Granato said. “The teams that are successful, you have leadership right throughout the entire team.”

Rasmus Ristolainen also scored for the Flyers in his first game back in Buffalo since getting traded during the offseason, and Cam Atkinson had two assists. Martin Jones gave up four goals on eight shots in 18 minutes before being replaced by Carter Hart, who finished with 14 saves.

Thompson put the Sabres ahead with power-play goals 24 seconds apart in the first period. Tuch set up Thompson for his first goal in seven games with 4:27 left. While the Flyers served a penalty for interim coach Mike Yeo’s unsuccessful challenge that Krebs was offside on the play, Thompson picked up his 14th goal off an assist by Dahlin.

Krebs scored his first NHL goals in his 20th game and sixth with the Sabres since being acquired from Vegas in a trade for former captain Jack Eichel. He tipped in Henri Jokiharju’s shot with two minutes left in the first period and scored again on a breakaway to make it 5-2 at 2:24 of the second.

“That definitely gives you a little boost, for sure” said Krebs, who turns 21 next week. “I dream of that as a kid, and I want to do it again and again.”

Skinner gave Buffalo the lead 1:29 into the game and was set up by Dahlin on a power play 4:36 into the third. Skinner leads the Sabres with 16 goals, and Dahlin recorded his team-best 21st assist.

Giroux redirected Travis Konecny’s shot past Houser on a power play with 5:10 remaining in the game for his 14th goal.

The Flyers fell to 2-18-3 when failing to score first, even after Ristolainen and Giroux scored 1:16 apart for a 2-1 lead in the opening period.

“We got outworked from the first shift of the game,” Ristolainen said. “When you have a lot of losses coming in a row, I think it should hurt more every time. And when you get outworked like this, it obviously hurts even more.”

Buffalo had squandered two-goal leads in its past two losses. Falling behind after scoring first was a rallying point in this win.

“I loved the talk on the bench at that point,” Granato said. “They were a little ticked off and wanted more. And they got more.”

Flyers: Forwards Joel Farabee (upper body) and Kevin Hayes (abdominal surgery) both went on injured reserve Friday and are expected to be out for a month. ... F Wade Allison left in the second period with a lower-body injury and did not return. It was Allison’s season debut after being called up from the minors with F Jackson Cates.

Sabres: At Ottawa on Tuesday to open four-game trip.