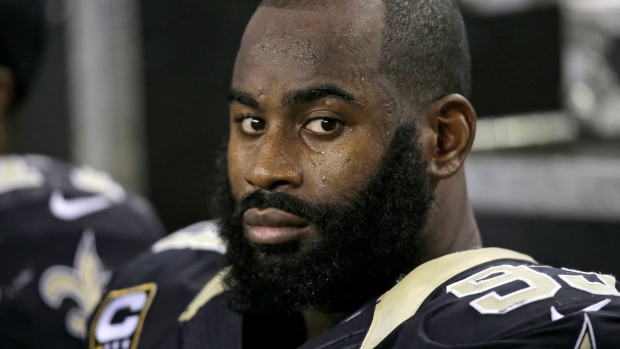 NEW ORLEANS - New Orleans Saints linebacker Junior Galette was arrested Monday in a domestic violence case in which a woman says her face was scratched and her ear bloodied after an earring was ripped off.

Galette was booked with misdemeanour simple battery stemming from the disturbance at the player's house in Kenner, a New Orleans suburb. Prosecutors could later charge him. It is not clear if Galette, who left jail on $600 bond Monday afternoon, has a lawyer.

The woman contends Galette and cousin Terrance Banks, of Newark, New Jersey, forcibly removed her from the home during an argument that began when she demanded cab fare. Banks also was arrested and was released on $300 bond.

Because the case is in its early stages, it was unclear what punishment Galette could face from the NFL, which this past season adopted new codes of conduct pertaining to domestic violence.

The policy also says that "consideration is given to possible mitigating or aggravating circumstances."

According to McGregor, the woman gave this account: Galette pushed her and helped Banks pin her down in an effort to subdue her. She momentarily struggled to breathe while beneath the two men, and when they let her up she grabbed a knife, fearful she would be attacked again. At that point, Galette began to record a video of her actions.

The woman told police that after she dropped the knife, Banks lifted her off the ground and carried her from the home, and Banks then took her phone as she started to dial 911.

McGregor said Galette also indicated he had a video recording, and police are attempting to execute a search warrant to obtain it.

When police asked the woman about her relationship with Galette, she said she has "stayed with" him for about two years, cooking, cleaning and doing "everything for him that he wants, and he takes care of me," McGregor said.

Galette disputed that the woman lived with him and referred to her as "a dancer," McGregor said. Galette did not give authorities any other statements about the disturbance, McGregor added.

The 26-year-old player was the team's sacks leader this season 10. He was signed as an undrafted rookie in 2010 and in September signed a $41.5 million contract extension through 2019.