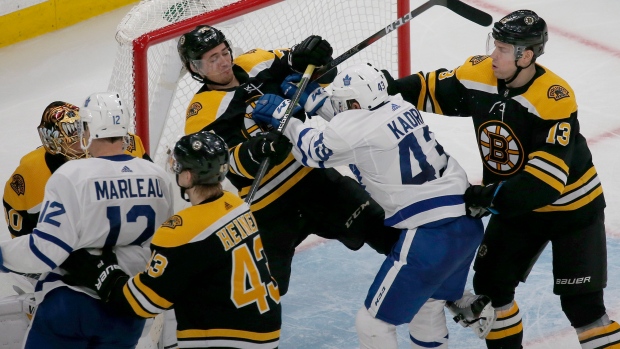 Colorado Avalanche general manager Joe Sakic joked Tuesday that the key to having newly acquired centre Nazem Kadri avoid suspension in the postseason could be matchups.

"Don't play Boston. If we play Boston, we're in good shape, so that's good," Sakic told Altitude 92.5FM, implying such a meeting would take place in the Stanley Cup Final. "No, listen, the way he is, his makeup... to try to get somebody to pull back is a lot easier [than it is] to try and get something out of a player. So it's in him. He's a real competitive guy. Last year, obviously, he crossed a line in that one game but when you look at what happened leading up to that you could probably see what happened and why that may have taken place.

"For us, he's a great hockey player. He's signed for three years and for what we're looking to do moving forward here in the next couple years. We think we've got a great fit for him."

The former Toronto Maple Leaf picked a suspension in the first round of the playoffs against the Boston Bruins for a second straight year this past spring. Kadri was suspended for the remainder of the first round after cross-checking Bruins forward Jake DeBrusk in the head in Game 2.

The 28-year-old was traded to the Avalanche on Monday along with Calle Rosen and a third-round draft pick for Tyson Barrie and Alexander Kerfoot.

Kadri scored 16 goals and posted 44 points this season in a reduced role behind Auston Matthews and John Tavares after scoring 32 goals in each of the previous two campaigns. He had one goal and one assist in two playoff games before his suspension.