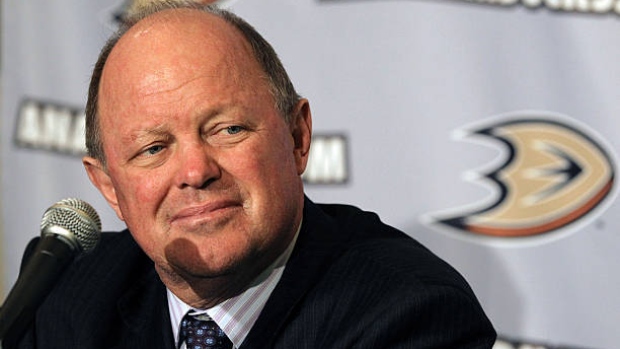 A little over three months after he resigned as general manager of the Anaheim Ducks amid a team investigation of workplace misconduct allegations levelled against him, Bob Murray is back in the NHL.

The Calgary Flames have hired Murray to scout NHL teams in California, as well as evaluate the Flames’ American Hockey League affiliate in Stockton.

The arrangement has been in the works for several weeks and will be re-evaluated at the end of the season, the Flames announced Wednesday.

The 67-year-old Murray was initially placed on administrative leave by the Ducks on Nov. 9, 2021, after the allegation of improper professional conduct was reported via the National Hockey League’s abuse hotline.

The Flames consulted with both the league and the Ducks organization before hiring Murray, who during the time of his resignation said he would enter an alcohol abuse program.

“There’s no perfect answer other than you do your homework,” Flames general manager Brad Treliving said, when asked about the accusations levied against Murray during his tenure with the Ducks, and Murray being out of the league for less than four months.

“You do your homework to see exactly what’s gone on there. I’m sure Bob would be the first one to say that he’s made some mistakes. He has paid a price. He’s no longer the manager of a team and I think it’s been a time where he’s done a lot of reflection…he’s absolutely accountable when you talk to him.”

The Flames declined to make Murray available for an interview.

"I want to apologize to anyone adversely affected by my behaviour,” Murray said in a statement at the time of his resignation. “I vow to make changes to my life, starting with enrolling in a treatment program. …As I step away from the Ducks, I will focus my attention on where it should be: improving my life for the betterment of my family and friends."

Murray and Treliving have known each other since Treliving was a young hockey executive in the early 2000s. Treliving said that Murray is in a healthy place.

“He’s an honest man and I felt like he’s accountable for what’s happened,” Treliving said. “We learn from our past and learn from our mistakes, but we also have to look forward and try to be better. If we can help in that process, we certainly want to do that.”

Murray helps fill the void left by former Flames pro scout Derek Clancey, who was recently hired by the Vancouver Canucks as an assistant general manager.

Treliving views Murray as a complement to the team’s current scouting staff and someone who can offer different perspectives on players.

“In my opinion, Bob has been one of the most successful hockey executives in the past decade,” Treliving said. “Bob, as a manager, is one of the best talent evaluators in the game. That’s a real strength of his. He’s really strong at identifying talent, whether it be on the amateur side or the pro side.”

The Flames, according to Treliving, can also help Murray, who was the Ducks’ senior vice-president when Anaheim won the Stanley Cup in 2007.

“As much as we think he can help us, we think we can help him get him going a little bit and bring some more normalcy into his life,” Treliving said. “He’s not managing a team or anything. We’re going to take it real slow.”

Treliving is aware of the possible backlash in bringing Murray aboard but feels that he deserved another opportunity to work in the league.

“People can criticize, but ultimately you believe in your gut that this is a good man who you want to help and give an opportunity to,” Treliving said.