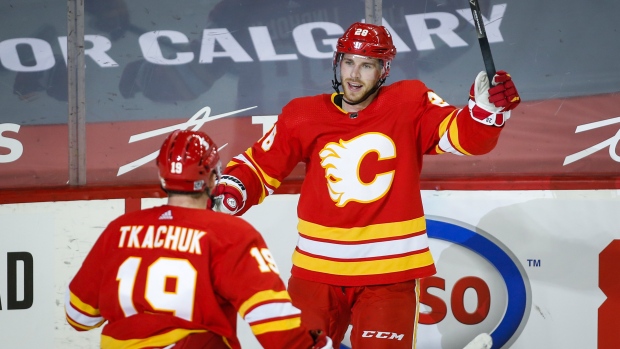 On Monday, the 32-year-old Calgary winger, one of the team’s better forwards this season, was the latest Flame to get asked about the team’s up-and-down play thus far.

The introspective Lucic compared it to the famous Robert Louis Stevenson novella.

"I think it's been a little, you know, Jekyll and Hyde,” he said before the team went on to a 4-3 overtime victory against the Vancouver Canucks on Monday night.

“I think our good has been really good, but it hasn't been there enough if you ask me for the first quarter of the season."

Or, as Stevenson wrote in 1886 when referring to Mr. Hyde (and not to this version of the Calgary Flames):

“He gives a strong feeling of deformity, although I couldn’t specify the point. He’s an extraordinary-looking man, and yet I really can name nothing out of the way.”

Through their first 15 games of the season, the two words that have been most used to describe the 2020-21 version of the Calgary Flames have been “competitive” and “consistency.”

Thus far, the team boasts an 8-6-1 record - fifth in the North Division, where the top four teams will make the postseason, and has yet to win more than three consecutive games.

More often than not, great efforts have been followed by poor ones. The latest example came last week. After defeating the Canucks 3-1 on Thursday night, they fired just four shots on goal in the game’s first period two nights later en route to a 3-1 loss while being outshot 46-19.

Longtime captain Mark Giordano wouldn’t put a letter grade on the early part of the season, but again echoed the need for consistency.

“We’ve had moments where we’ve been good,” he said last week. “But we know we can get a way more consistent 60-minute game night in and night out. We’re trending in the right direction but we’re not quite there yet.”

One of the troubling early-season trends is the team’s over-reliance on goalie Jacob Markstrom.

The Swede has arguably been the most impactful free agent signing of any NHL team last off-season. He’s played the fourth-most minutes of any goalie this season, behind only fellow North Division goalies Frederik Andersen, Mikko Koskinen, and Connor Hellebuyck. Markstrom was the team’s lone bright spot on Saturday night, stopping 43 shots - the fourth-highest number of saves by a Flames goalie in a regulation defeat in team history.

“He’s won a lot of hockey games for us already, but we’ve got to help him out,” Dillon Dube said.

Compounding the Flames’ challenges are the struggles of former starter David Rittich, whose 0.857 save percentage ranks second-last among the 64 goalies who have played more than one game this season.

Rittich’s struggles have forced Ward and the team’s new goaltending department to play Markstrom more than intended early on this season.

While Monahan, Johnny Gaudreau, and Elias Lindholm have produced offensively (and the line of Lucic - Mikael Backlund - Andrew Mangiapane has been the team’s most effective trio in February), offensive production beyond those players has been in short supply.

Newcomers Dominik Simon, Joakim Nordstrom, and Josh Leivo have combined for two assists in 33 games. Dube has struggled at times playing with Matthew Tkachuk and Lindholm, with just four points in his past 10 games (though he looked great while reunited with Lucic and Sam Bennett on Monday night against Vancouver, scoring once while being assertive on the forecheck).

The Flames’ next 13 games see them play division leaders Montreal and Toronto just four times combined, the Ottawa Senators five times and the Edmonton Oilers three times, providing an opportunity for Calgary to potentially make up ground in the standings.

- Something to watch for from the Vancouver Canucks: Two Flames players have used the term “full-court press” when referring to how they pressure teams in the neutral zone

- The North Division is seen as the most offensive of the four NHL divisions, but its defensive game is equally impressive, with Calgary, Toronto, and Montreal all ranking in the top-five in even-strength save percentage.

- As Ward continues to search for consistency, emotion, and competitiveness, it’s possible Brett Ritchie gets a look at some point. The 27-year-old, who’s shuttled between the roster, taxi squad, and AHL this season while on a one-year deal, could be effective in a fourth-line role. Last season, he was fourth among Boston Bruins forwards with 89 hits. From 2016-17 to 2018-19 with the Dallas Stars, he led the team in overall hits (451) and hits per game (11.84). Right now, the Flames rank 23rd (and last in the North Division) with 270 hits. Ritchie adds a dimension that’s clearly lacking with this group.