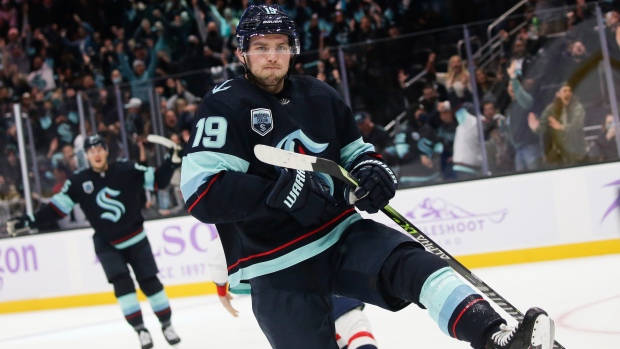 For years, Calle Jarnkrok, his cousin Elias Lindholm, and Calgary Flames goalie Jacob Markstrom have joked how great it would be to play on the same National Hockey League team together.

On Wednesday afternoon, they got their wish as Flames general manager Brad Treliving dealt a 2022 second round draft pick, 2023 third-round, and 2024 seventh-round pick to the Seattle Kraken in exchange for the versatile Jarnkrok.

The 30-year-old pending unrestricted free agent is a defensively-reliable, two-way forward who can kill penalties, play a shutdown role, and moonlight on scoring lines. In 49 games this season, he has 26 points…but his value goes beyond that.

“I’ve always considered him kind of a fixer,” Treliving said. "He's a defensive fixer on any line that can chip in offensively…We think he can touch a bunch of different parts of the game, he gives us more depth - and we like the player, so we're excited to add him."

Jarnkrok will likely centre the Flames’ third line and play alongside Andrew Mangiapane and Tyler Toffoli.

"I've been watching a lot of games this year when Calgary's been playing. Played against them a couple times,” Jarnkrok said.  “They're a very good team, very hard to play against.”

Treliving also lauded Jarnkrok’s compete level and how he will fit into the team’s identity under head coach Darryl Sutter.

"He really fits our DNA as a guy who's ultra-competitive," Treliving said. "We think he can touch a bunch of different parts of the game, he gives us more depth and we're excited to add him."

“Right-hand shot that can play in our top-nine and a guy that’s played in playoff races, which is important for our club,” Sutter said.

The key word is ‘competitive.’

Jarnkrok’s addition means a Flames forward will spend time in the press box. The two players currently fighting for a spot in the lineup, Dillon Dube and Brett Ritchie, each scored in the Flames’ 6-3 victory over the New Jersey Devils on Wednesday.

“It’s a competition,” Sutter said. “Other than one line, we’ve moved guys around all year. It’s because nobody’s grabbed onto [a spot]…it’s not, ‘I’m up’ and jump over the boards. It’s about performance.”

With Jarnkrok on the roster also means the Flames will not have to rely on rookie Adam Ruzicka as a top-nine pivot. Immediately after the trade, Ruzicka was sent to the AHL's Stockton Heat.

Now, the Flames are teeming with adaptability.

With a handful of days until Monday’s trade deadline, the Flames do not appear likely to make another splash. They have already landed two top-nine forwards in Toffoli and Jarnkrok and beyond adding a blueliner for depth, this is likely the roster they will go into the playoffs with.

They have a deep group of forwards, a well-rounded defence, and goalie in Markstrom playing like a Vezina finalist.

Forward Milan Lucic and other veterans appreciate the investment Treliving has made in the group in trading five picks and prospects over the past six weeks.

“It gives us confidence and belief in ourselves, because we got belief from up top,” Lucic said.