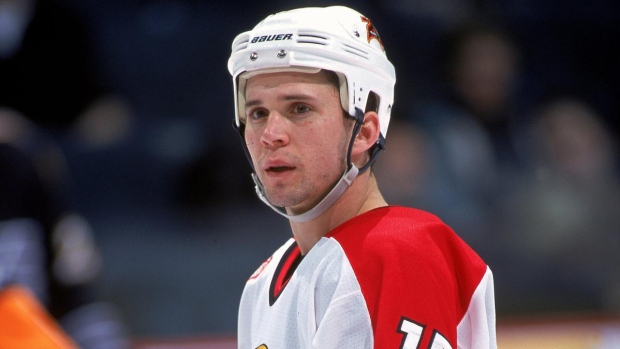 When Brian Sutter was coaching the Boston Bruins in the early 90s, many in the scouting world were fixated on Paul Kariya, then a hotshot college player with the Maine Black Bears who would go on to be a top pick in the 1993 draft and have a Hall of Fame career.

Sutter’s eyes, however, were glued to one of Kariya’s opponents in the Hockey East conference – an undersized, relentless forward from Quebec on the Vermont Catamounts named Martin St. Louis.

“I loved him from the first time I saw him play,” Sutter said. His brother, Darryl, will coach the Calgary Flames against St. Louis and the Canadiens on Thursday.

“This isn’t a knock on Paul Kariya, but I thought Marty was as good a player as Paul was, and Paul ended up being the big draft pick…every time I watched [Marty] play, I thought, ‘What’s going on here? Why hasn’t this guy been drafted?’”

After his stint with the Bruins, Sutter found himself back in his native Alberta as the head coach of the Flames in the 1997-98 season and hadn’t forgotten about the college kid he’d seen play a couple of years earlier.

“One of the first things I did when I went to Calgary when we were getting ready for camp was talk to some of our scouts about Martin St. Louis,” Sutter said.

“They were like all the other scouts in the professional world. For whatever reason, they didn’t think he was ready to be a pro player…I’ll never forget talking to [then Flames general manager Al Coates]. The scouts obviously didn’t feel that he was warranted to get an invite to training camp. That’s all I wanted, was for him to get an invite to training camp, not even for us to sign him. Let’s just get him there; because I knew he had a chance to play.”

“All the credit should go to the late, great Nick Polano [then the Flames director of pro scouting],” Coates said.

St. Louis was starring in the International Hockey League for the Cleveland Lumberjacks. Polano went to the IHL All-Star Game, which St. Louis was participating in, and saw for himself what Sutter had been raving about.

“He called me after the game and says, ‘We really need to think about this player because he’s small, but he’s dynamic. I don’t really see any downside in signing him, and who knows where it might go?’”

Coates signed St. Louis and he reported to the Flames’ American Hockey League affiliate in Saint John, where he had 26 points in 25 games.

“Nick [Polano] came down to the dressing room after a game halfway through the year and says, ‘Oh by the way, Brian, we’ve signed Marty St. Louis to an American league contract,’” Sutter said.

The Flames did not worry about St. Louis’ size and ability to handle the physicality of the National Hockey League. In the late 90s, they weren’t lacking in other smaller players, among them Theo Fleury, Marc Savard, Valeri Bure, and Corey Stillman.

“I don’t recall that size was a concern,” Coates said. “Determination and skating and skill compensates for a lot of things, and that’s obviously what he demonstrated early on that made him appealing…there just wasn’t downside really to taking a chance on a player like that who appeared to be so dominant only one level down.”

St. Louis made his NHL debut on Oct. 9, 1998, against the San Jose Sharks, and scored his first goal 11 days later in Dallas. He spent three seasons with the Flames organization, scoring four goals and 20 points in 69 games with the Flames. With Saint John, he accumulated 114 points in 95 games. After the 1999-2000 season, Coates was let go and St. Louis was a free agent.

“I’ll never forget Tampa Bay calling me about him when they were going to give him an opportunity,” Sutter said. “What I’m talking to you about [St. Louis], they also heard from me.”

The rest of the story has been well documented.

St. Louis hoisted the Stanley Cup in 2004 with the Lightning, defeating his former team in seven games. He won the Art Ross, Hart, and Lady Byng trophies, scored 1,033 points in 1,134 games with the Flames, Lightning, and New York Rangers, and was voted into the Hall of Fame in 2018, his first year of eligibility.

Now, he is coaching his boyhood team, the Montreal Canadiens.

At first glance, the team’s decision to hire someone with no professional hockey coaching experienced seemed risky, but many feel he will succeed in helping turn the organization around. St. Louis is 5-4-0 so far behind the bench.

“I never thought he’d become a coach, but then I saw him coach summer hockey with his kids,” said Denis Gauthier, who came up with St. Louis in the Flames organization.

“He was so professional with the kids, doing the right things and asking them to play the right way. They were the best minor hockey coached team I’d ever coached against, just the way he had them play. He had a vibe for the game and how it should be played and taught at a young age for the players to become better as they get older. The kids all played a very mature game…Marty has this positive cockiness about him. His assurance. He knows where he wants to go and what he wants. His aura is like no one else, so when he steps into the locker room, he’s got instant respect from all the guys, whether he has that coaching experience or not.”

“He’s got a work ethic second to none,” said Mike Gilligan, St. Louis’ coach with the Vermont Catamounts.

The two remain in touch, including on the day St. Louis was hired by the Canadiens.

“I texted him and said, ‘Wow. You’re always up for challenges and this is a big one.’ And he texted back with a smiley face,” Gilligan said.

And on Thursday, some 25 years after his NHL debut, St. Louis will coach at the Saddledome against the organization that gave him his big break.