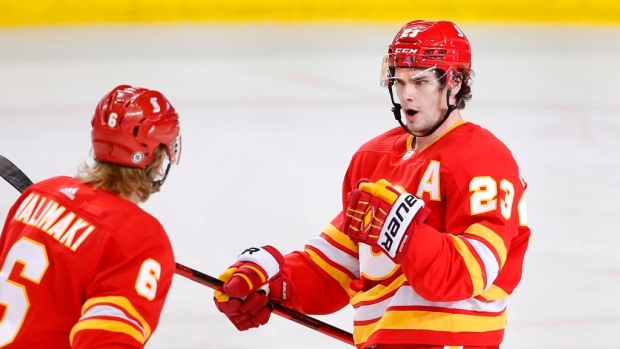 In the end, it was a fairly nondescript Artturi Lehkonen shot off the rush on Monday evening that sealed the Calgary Flames’ seemingly inevitable fate of playoff elimination.

The Montreal Canadiens winger skated in and fooled Edmonton Oilers goalie Mikko Koskinen to tie the game 3-3 with less than seven minutes left.

With the point they would pick up when the game went to overtime, the Canadiens clinched the fourth and final playoff spot in the North Division, ending Calgary’s faint hopes of catching them.

Now, general manager Brad Treliving and the Flames organization face a delicate balance with four games – all against the Vancouver Canucks – remaining in the schedule.

There is the development of younger players on the current roster, namely 22-year-old blueliner Juuso Valimaki.

The Finnish defender had Calder Trophy aspirations prior to the season, but has struggled to gain the trust of head coach Darryl Sutter. The veteran bench boss has scratched Valimaki five times since he was rehired in early March, and publicly said on numerous occasions that Valimaki isn’t quite ready to be a full-time NHLer yet.

Despite his first year growing pains, the 2017 first-round pick is still a key member of the franchise and seen as a future top-four blueliner. Veteran defenceman Chris Tanev has helped both Noah Hanifin and Mark Giordano improve their games when paired with him, and could do the same for the young Valimaki.

Sutter could also see if Valimaki, who has played a total of less than eight minutes on the man advantage this season, can quarterback a power play and handle increased minutes without fear of losing playing time for any mistakes.

Dillon Dubé is another player whose development should be prioritized. In his second full season, he has 19 points in 47 games while playing mostly on the third line.

Under Sutter, Dubé has had the 11th-most power-play time per game of any Flames player. In the final few games, Sutter could accord more responsibility and playing time to the 22-year-old forward, who will likely be a top-nine winger with the Flames for the coming years.

The organization can also use the remaining games to see which American Hockey League players could fit into next season’s plans.

They already inserted Glenn Gawdin into the lineup, having him centre a trio flanked by Milan Lucic and Brett Ritchie on Sunday evening versus Ottawa. Gawdin notched his first career NHL point that night, an assist on a goal by Michael Stone. The 24-year-old Gawdin was an AHL all-star last season, leading the Stockton Heat with 47 points in 53 games and has been used in all situations.

Beyond Gawdin, forwards Adam Ruzicka and Matthew Phillips have both shown the ability to score in the AHL, while blueliner Connor Mackey was fourth on the Heat in points this season.

Then there is the NHL draft lottery and improving the franchise’s odds.

As of Tuesday morning, the Flames had the 10th-best odds for the No. 1 pick. Since moving to Calgary, the Flames have never had a top-three pick. Shutting down the likes of Jacob Markstrom and Tanev, among others, would certainly help the franchise in a year that’s presented the rare opportunity for a high draft pick.

The final four games of the season, of course, are a prelude to an off-season where major changes are expected.

But before that, there is a delicate balance of the development of current players, getting a look at possible future NHLers already within the organization, and keeping an eye on adding a top prospect in the upcoming draft.