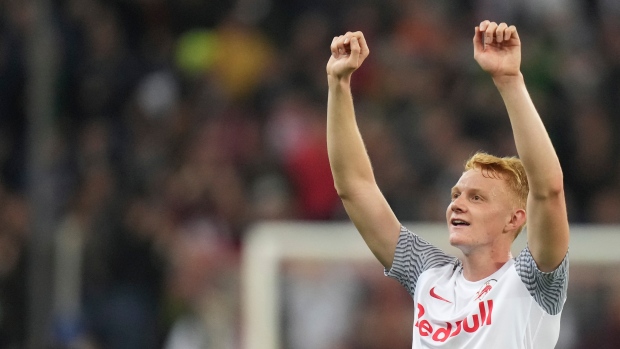 Noah Okafor scored twice after 19-year-old forward Karim Adeyemi netted early to put the Austrian team on course for victory as it bids to reach the knockout round for the first time.

“I think, if we carry on this way, if we really give everything in every game, then we have really a great chance of reaching the knockout stage,” Okafor said.

Less than three minutes into the game, Germany international Adeyemi scored his third goal of the group stage, showing off his pace on the counter to beat defender Kevin Mbabu to a pass and sprint into the penalty area before scoring past Koen Casteels in the Wolfsburg goal. That was Salzburg's first goal from open play in this year's Champions League after all of its previous three came from the penalty spot.

Wolfsburg responded in the 15th when Lukas Nmecha got a glancing header on a corner to tuck the ball inside the far post. The German team had only one more shot on target all game.

Okafor, a 21-year-old winger, took full advantage of sloppy defending by Wolfsburg to score twice at corners. First, he knocked in a loose ball in the 65th after Wolfsburg twice failed to clear the ball, and then he made it 3-1 in the 77th with a turn and shot when left entirely unmarked.

Salzburg has seven points from three games and is top of Group G by four points from Sevilla after the Spanish club drew 0-0 at Lille.