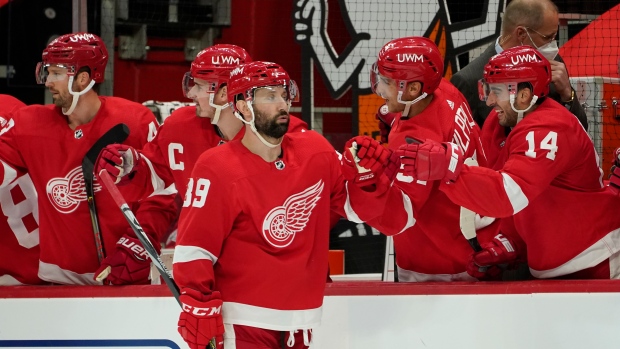 “It certainly felt good,” Gagner said. “We’ve been pushing as a group to find something to feel good about. It’s obviously nice to get a win and hopefully we can keep building on it.”

Luke Glendening and Adam Erne also scored for Detroit, which set a season high for goals. Jonathan Bernier made 37 saves, improving to 11-5-0 in 18 career games against Nashville.

“At the end of the night, we’ve got to be a team that competes extraordinarily hard every night,” Red Wings coach Jeff Blashill said. “I think we did a good job of that today. Structurally, I think our structure was good again. We did have some breakdowns at times and when we did Bernie was real good.”

Mikael Granlund and Erik Haula scored for the Predators.

“We were a little bit loose on our line rush against, gave up some chances that way and they got momentum on it,” Predators coach John Hynes said.

Gagner snapped a 2-all tie at 9:58 of the third period. He spun into the right circle and fired the puck, which banked off goaltender Pekka Rinne’s right skate and into the net.

Gagner’s first goal, a bad-angle shot from the right corner, came at 8:38 of the second. His third was an empty-netter at 16:56 of the third.

Bobby Ryan assisted on the first two goals by Gagner.

“I think Bobby has been around it, he’s been creating a lot,” Gagner said. “You look at the first one, he does a great job of hunting the puck down, getting it to me, and we get a bit of a fortunate bounce. Even on the second one, he does a really good job of recognizing I have a lane and kind of leaving it for me and I got another bounce.”

Rinne, who shut out the Red Wings on Tuesday night, had 28 saves.

Detroit has won two of its last three and prevented Nashville from recording its first three-game win streak of the season.

“Especially in the second, I thought we turned over too many pucks,” Predators captain Roman Josi said. “They’re a pretty fast team and had a lot of counter chances, a lot of odd-man rushes, so I thought we got away from it a bit.”

Glendening gave Detroit a 1-0 lead at 4:55 of the first when he backhanded a rebound past Rinne. Both of Glendening’s goals this season have come against Nashville.

“We see where we are in the standings, which is frustrating, but a win like this can help the confidence and get us moving forward hopefully,” Glendening said. “We played OK last game, our special teams wasn’t up to snuff. We let one in early on the PK today but battled back. That’s what this team has to continue to do, show up and work hard and keep battling every night.”

The Predators tied it at 14:15 when Granlund went to the net and backhanded the rebound of Josi’s shot past Bernier.

Haula tied it again when he backhanded a rebound past Bernier at 2:55 of the third.

“We’ve been playing better as a group, more consistent, and had a couple wins there,” Haula said. “I thought we were trending toward the right direction, so this one hurts.”

Josi has 12 assists in his last 12 games against Detroit.