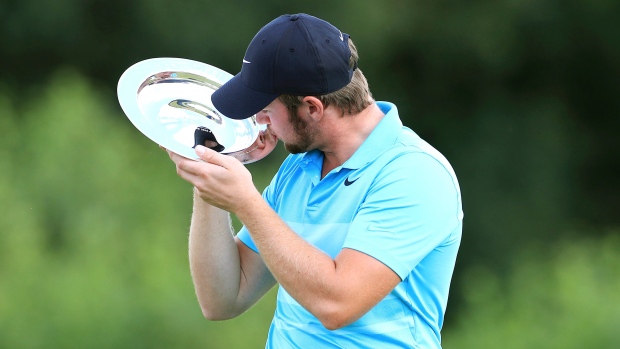 BIRMINGHAM, England — Sam Horsfield shot a final round 4-under 68 to win the Hero Open by one stroke Sunday in the European Tour’s latest stop in England.

The 23-year-old Englishman clinched his first European Tour title with an 18-under 270 total, holding off second-place Thomas Detry, whose 6-under 66 had briefly given him a share of the lead.

Detry, a 27-year-old Belgian, had nine birdies and three bogeys in his final round at the Forest of Arden Marriott Hotel and Country Club.

Overnight leader Horsfield birdied the 17th hole to go ahead of Detry, who was already in the clubhouse, and secured victory with par at the 18th. His victory was powered by a 9-under 63 on Friday.

“It’s crazy. I can’t (describe my emotions),” Horsfield told Sky Sports. “On 17 we wanted to leave a good number and I hit a great shot there.”

Detry had recorded his final birdie on the 17th to move into the lead for the first time, only to bogey the last after seeing his par putt from 3 feet catch the edge of the cup and stay out.

Horsfield did not hesitate to take on the approach to the par-five 17th, a towering fairway wood from 238 yards over the water setting up a two-putt birdie from just over the green.

A cautious tee shot on the last left Horsfield around 50 feet from the hole, but he safely two-putted for par to complete the victory.

Sebastian Garcia Rodriguez of Spain, who set a course record 10-under 62 in the opening round, shot 1-over 73 and finished tied for 10th on 11 under.

Miguel Angel Jimenez, making his record 707th European Tour appearance, shot a par-72 to finish tied for 34th on 7 under.