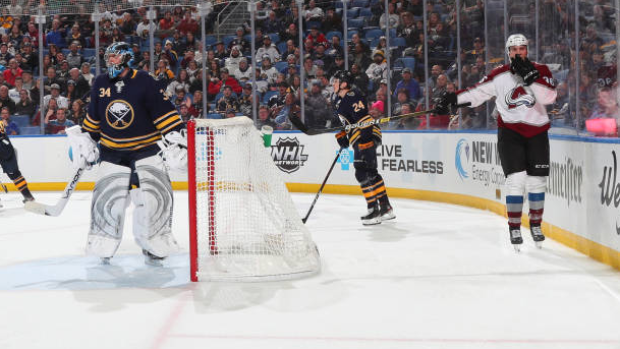 Sabres forward Sam Reinhart, who scored the team's lone goal in a 6-1 loss to Colorado on Tuesday, called out his teammates after the blowout loss, which left Buffalo 11 points back of a playoff spot.

"I think it's all coming down to the players at this point," Reinhart told reporters. "I think that the systems and the game plans that are set out for us give us an opportunity to have success. I think it goes back to what I'm trying to preach here. Guys need to demand more out of themselves, and a lot of guys need to step the hell up."

The Sabres trailed 2-1 after 20 minutes on Tuesday, but allowed four goals in the first 13 minutes of the second period.

“Today was s---,” defenceman Rasmus Ristolainen said after the game. “I never thought I'd have to say this, but I had a lot of these games here. They're not fun to play. No one wants to play games like we had tonight.”

Goaltender Carter Hutton allowed five goals on 13 shots in Tuesday's loss, but Sabres head coach Ralph Krueger refused to place the blame on Hutton, despite the team only being outshot 27-24 on the night.

"I don't think it's fair to put this on Carter," Krueger said. "People look at the shot clock, but they out-chanced us, they out-chanced us even though the shots were quite equal there. It wouldn't be fair to put this one on him; it's all of us - coaches, players - all of us together. This is on all of us. We need to pull together and react to this. We have a game here at home in two nights (against the Detroit Red Wings). We need to show a different side, for sure."

“I can understand our fans’ frustration,” Botterill said. “To put it bluntly, my conversations with Terry and Kim, they’re frustrated with the results. They want better results. Our dialogue, we’re in constant dialogue, the dialogue goes to, ‘What are the solutions? What are we doing to get better?'”

The Sabres have missed the playoffs in each of the past eight seasons and last won a playoff round in 2007.