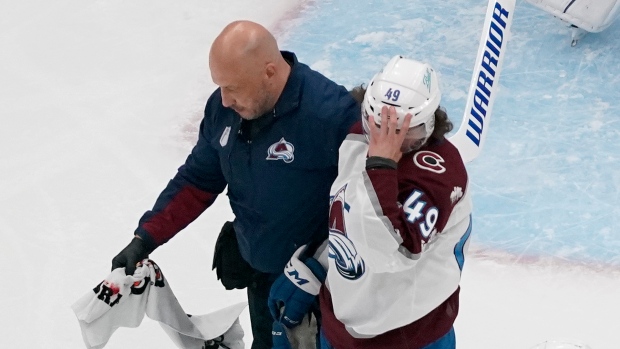 Colorado Avalanche head coach Jared Bednar told reporters that defenceman Samuel Girard has been ruled out for the remainder of the Stanley Cup Playoffs after suffering a broken sternum in Game 3 of their second-round series Saturday night against the St. Louis Blues.

Girard broke his sternum and will be out the rest of playoffs, per Jared Bednar.

Girard was injured after being hit up high into the endboards by St. Louis' Ivan Barbashev just under two minutes into the game. He was ruled out for the night at the end of the period and was taken to a local hospital for evaluation.

Girard stayed down on the ice as play continued the other way. The whistle was eventually blown and the training staff rushed onto the ice to attend to the Avs' blueliner. Barbashev was not assessed a penalty on the play as the Avs went on to win 5-2.

Meanwhile, Blues goaltender Jordan Binnington was also forced to leave Saturday's game after being bowled over by Blues defenceman Calle Rosen and Avs forward Nazem Kadri just a couple minutes after Girard left the ice. Binnington was replaced by Ville Husso and was not on the bench to begin the second period.