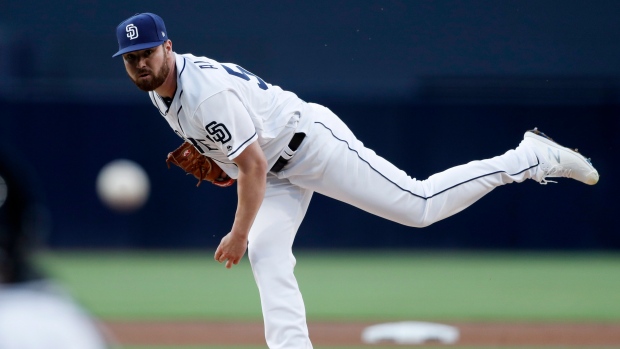 SAN DIEGO — Left-hander Logan Allen will have so many memories of his major league debut that he might not know where to start.

There was the moment in the bullpen warming up when a fan handed him a button with a long-ago picture of him and his older brother, Philip, whose condition is best described as severe cerebral palsy and couldn't be at Petco Park to watch Allen pitch.

WWE superstar John Cena, who became friends with Allen after a chance meeting in a Tampa steakhouse in January 2018, watched from the owner's box, wearing Allen's No. 54 Padres jersey. Allen warmed up before the first inning to Cena's "The Time Is Now."

When closer Kirby Yates came out of the bullpen in the ninth, "I just like stood up on the bench and just did a full 360 and it was like, 'Wow, I'm in the big leagues,'" Allen said. "It was awesome."

He said his debut was "10 times better" than he could have imagined. "You can draw it up any way you want to until it happens. When it happens like that it's incredible. I can't describe the feeling. I worked my entire life for this. To be able to do it, and do it really well was awesome."

Allen (1-0) held Milwaukee to three hits while striking out five and walking two. After being bailed out by a double play in the sixth, Allen struck out the side in his last inning and pumped his fist as he walked off the mound.

Allen was acquired with three other players from Boston for closer Craig Kimbrel on Nov. 13, 2015.

Allen, 22, was backed by three double plays as well as another dazzling play by rookie shortstop Fernando Tatis Jr. Tatis gloved Lorenzo Cain's grounder with two outs in the third, spun and threw to first. Cain originally was called safe, but the Padres challenged and it was overturned after video review showed the throw beat the runner. Allen pumped his fist after the play, and was disappointed when Cain was originally ruled safe.

Allen also got his first hit, a single to right in the two-run fifth. He eventually scored on a throwing error by third baseman Mike Moustakas. Machado followed with an RBI ground-rule double to right-centre.

On the night they met, Allen and Cena made a $1 bet on whether the pitcher would reach the majors.

"I'm glad he could be here," Allen said. "He was wearing my jersey. That was really cool. Some of the guys in here were a little jealous which made me feel a little better. It was awesome. Obviously John owes me $1. So, I can't wait to receive that."

As for the balls from his first hit and victory, "I don't know where they're going to go yet," Allen said. "Obviously if I give them to my dad now he might crawl into a little ball and start crying."

The Brewers scored a run without the benefit of a hit off Trey Wingenter in the eighth, on a walk by Jesus Aguilar, two groundouts and a wild pitch. Yates finished the combined four-hitter when he pitched the ninth for his 26th save, most in the big leagues. He tied Heath Bell (2011) for the most saves by a Padres closer before the All-Star break.

Mejia, recalled from Triple-A El Paso on Monday, homered to right-centre off Brandon Woodruff with one out in the sixth. It was his first. Mejia caught Allen in the minors.

"That's the one pitch I want back," said Woodruff (8-2), who allowed four runs and seven hits in six innings, struck out six and walked one. "I literally think I could have thrown it anywhere besides right there. I tried to go a little bit higher than high and I just pulled it right down into his wheelhouse and he did a good job on it."

Manager Craig Counsell said the double plays hurt. "Every rally was kind of squashed by that. We just didn't get enough going against them. He did a nice job. He pitched very well. It was more than I expected. It was standard as far as just he mixed up his pitches and threw strikes. We didn't put enough pressure in general. He just had a good arm and a good night."

OF Hudson Head signed with the Padres for $3 million, making him one of the highest-paid players in this year's draft even though he was a third-round draft pick. He's represented by Scott Boras.

Brewers: 3B Mike Moustakas left with a bruised left hand after the fifth, when he was hit by a pitch by Allen. "He caught it in kind of his first three fingers. X-rays were negative," Counsell said. "He was pretty sore coming out. A little scared for sure, but he's all right."

Brewers: RHP Zach Davies (7-1, 2.60) is scheduled to start the series finale Wednesday afternoon. He I s 3-0 with a 2.16 ERA in four career starts against the Padres.