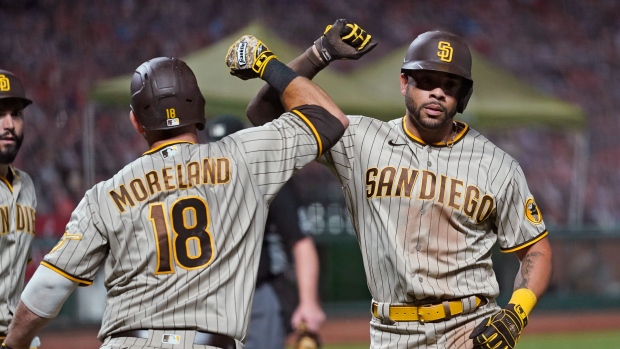 SAN DIEGO — Tommy Pham knows how lucky he was to be in the starting lineup for the San Diego Padres in their spring opener on Sunday, 4 1/2 months after he was stabbed in the lower back during an altercation in the parking lot of a strip club.

It could have been much worse.

“The cut’s deep. The doctor here basically told me if I wasn’t so muscular, I might be dead or paralyzed,” the left fielder said during a videoconference with reporters from Peoria, Arizona.

As he was being rushed to the hospital in an ambulance on Oct. 11, three nights after the Padres were eliminated from the playoffs, Pham was on the phone with general manager A.J. Preller and trainer Mark Rogow.

“I thought I wasn’t going to be able to play,” Pham recalls telling the club officials.

“When I got the CT scan, the doc was like, ‘I’ve got great news for you. You can play.’ She just said it’s going to be a little bit of a recovery.”

Pham said late last year that he needed 200 stitches to close the gash. A video posted online showed the lower part of his white shirt soaked in blood.

The San Diego Police Department is still investigating, and no arrests have been made.

Preller said Sunday that “obviously it’s not the type of news you’re expecting, ever, that type of phone call.”

Preller said Pham was “just matter of fact in terms of talking about what happened. The biggest focus for us was just making sure that we were in a position to get our doctors on the case and try to make sure we were being smart to give him every possible advantage in the care he needed at that point.”

Preller said the first thing that stood out “is how lucky he was, when you’re talking about a stab wound really in any area, but that was as deep and extensive as it was. If it was a centimetre in either direction, maybe a different outcome. Once we got past that hurdle, with his work ethic and the way he attacks things and gets in the gym and takes care of himself, he was going to give himself every possible opportunity to come back.

“He’s in great shape. Obviously he had some different injury stuff last year. I think he’s ready to go.”

Pham said his recovery included bedrest and then he flew to San Francisco every week for about six weeks to get injections of Regenokine to help with the inflammation.

“I worked with a few doctors on getting to where I’m at because it’s only been about 4 1/2 months and the timeline is normally a little bit longer,” he said.

The injury affects him when he tries to do squats and deadlifts in the weight room.

“My norms aren’t there yet. You don’t really have to squat a lot or deadlift a lot to be a good baseball player,” he said.

After being traded from Tampa Bay to San Diego, the 32-year-old Pham was limited to 31 games during the pandemic-shortened 2020 season due to an injury to his left hand that required surgery in mid-August. He hit .211 with three home runs and 12 RBIs. He hit .375 in the playoffs.

He had another hand surgery in October.

Pham said his perspective hasn’t changed since the stabbing.

“I still look at everything almost the same. If anything, I probably would just spend more money and stop saving as much, because if I died I would feel like I had too much money in the bank and I didn’t live enough.”