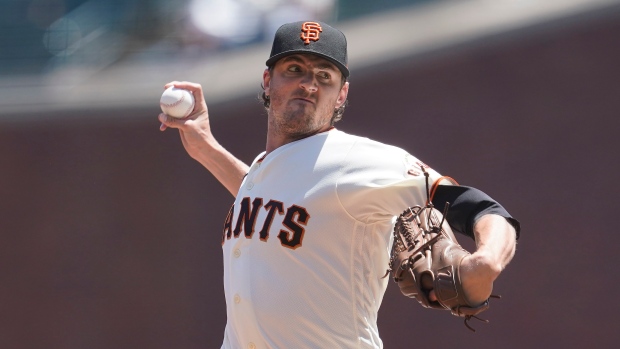 Lightly regarded when the season began, the Giants (20-13) own the National League’s best record and a 2 1/2-game lead over second-place San Diego in the West. The Giants have thrived at home, posting a 12-3 record at Oracle Park.

“Not to be too cliched about this, but one game at a time,” Giants manager Gabe Kapler said. “I’m really confident in the baseball that we’ve played so far in this series, but we have another big game tomorrow.”

Crawford ignited the Giants with his seventh homer of the season, a three-run drive in the third inning off Joe Musgrove (2-4). Crawford is batting .355 (11-for-31) in his last 12 games.

Slater had a pinch-hit RBI single in the sixth, stayed in the game to play the outfield and had a two-run homer to centre field in the eighth.

“You have to give San Francisco credit,” Padres manager Jayce Tingler said. “They’re grinding out at-bats.”

Gausman allowed only three Padres to reach scoring position. He retired 11 consecutive batters from the first through fifth innings.

“Today he had stuff,” Kapler said. “That always helps against athletic power hitters (such as Manny) Machado and (Fernando) Tatis.”

Tingler is tired of seeing his lineup struggle. San Diego has scored 13 runs in its last six games, an average of barely more than two per game.

“We have to play better baseball. Right now we’re not doing that,” said Tingler, who was ejected in the sixth inning for arguing balls and strikes with umpire Nic Lentz.

Padres: Placed RHP Keone Kela (forearm strain) on the 10-day injured list and recalled RHP Miguel Diaz. Kela was activated last Sunday after a stint on the IL due to right shoulder inflammation. ... Nola was back in the starting lineup after being forced out of Friday’s game with a bruise on his left hand suffered when he was hit by a pitch from reliever Zack Littell. ... Sunday’s starting pitcher has yet to be determined. Dinelson Lamet and Ryan Weathers have been mentioned as candidates, though Chris Paddack could leave the injured list to get the call.

Giants: Kapler announced that RHP Aaron Sanchez was placed on the 10-day injured list with tightness in his right biceps. “It has been going on for the last couple of starts,” Kapler said. With Sanchez shelved, Kapler said that Alex Wood and Logan Webb will start Monday and Tuesday against Texas, respectively ... 2B Wilmer Flores returned to the lineup after being removed from Friday’s game with lower back discomfort. Kapler said that Flores underwent an MRI on Saturday morning that showed no structural damage.

Padres: Hadn’t named a starter for Sunday prior to Saturday’s game. It could be LHP Ryan Weathers or RHP Dinelson Lamet, who are being brought back slowly due to arm ailments. Both pitched in a 2-1 loss to Pittsburgh on Tuesday night.

Giants: RHP Johnny Cueto, who missed four starts with a strained right lat, will be reinstated from the 10-day injured list to face San Diego in Sunday’s series finale.