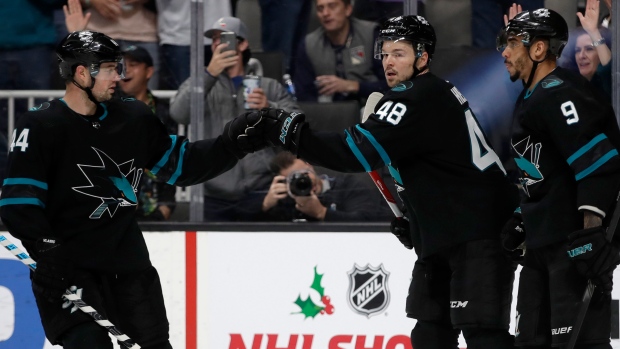 SAN JOSE, Calif. — Interim coach Bob Boughner talked about having an open competition at goaltender for the San Jose Sharks after taking over earlier this week.

Aaron Dell more than made his case to get another start.

Dell made 33 saves, including several tough stops while protecting a lead in the third period, and the San Jose Sharks snapped a season-high six-game losing streak by beating the Vancouver Canucks 4-2 on Saturday night.

“He was our best player,” Boughner said. “He made some key saves at key times and really kept us in it when we were starting to take on water. That's what a goalie does in a win like that.”

It will be the first time all season that Dell will start consecutive games as the Sharks try to get on a roll after giving Boughner his first win since taking over from the fired Peter DeBoer earlier this week. San Jose lost its first game under Boughner 6-3 to the Rangers on Thursday night.

“I think our compete level was a little big higher," Dell said. "I think we really wanted to dig ourselves out of this hole and this was the first step. I think we played a little safer of a game tonight than we have in the past, and I think that showed a lot.”

Tomas Hertl and Timo Meier scored to give San Jose the lead. Evander Kane and Logan Couture added empty-net goals around a score by Bo Horvat with 28.4 seconds to play for Vancouver.

The Sharks were protecting a 1-0 lead early in the third when Dell came up with several big saves following defensive breakdowns, robbing J.T. Miller, Tanner Pearson and Brock Boeser early in the period. He made another stop of Boeser to fuel a rush the other way.

Erik Karlsson sent a pass out to Meier, who worked a give-and-go with Kane before beating Markstrom with a one-timer for his 11th goal of the season.

“You want to feel good about your game," Sharks defenceman Marc-Edouard Vlasic said after playing his 1,000th career game. Now "some guys are feeling better, we’re feeling better as a team. It’s just one game so we’ve got to string some together.”

Virtanen answered less than a minute later on a pass from Adam Gaudette but Dell held the Canucks off until after Kane's goal restored the two-goal advantage.

“It’s never easy chasing the game the entire night," Horvat said. We “have to find a way top come out better. It’s execution. Once we started passing and making plays for each other we played well.”

For the second straight game under Boughner, Hertl opened the scoring in the first period for San Jose. The Sharks put together a strong forechecking shift for some extended zone time. Joe Thornton then slid a pass across the crease to Hertl, who was all alone and beat Markstrom for his 12th.

San Jose was unable to build on an early goal by Hertl in Boughner's first game as they went on to lose 6-3 to the New York Rangers on Thursday night.

But they kept the pressure on for most of the rest of the first period against Vancouver, killed a pair of delay of game penalties starting late in the first and carrying over into the second and then got strong play from Dell in the second period to maintain the 1-0 advantage.

Brandon Sutter nearly tied it in the closing seconds of the middle period but his deflection trickled just wide of the post right before the buzzer.

“The whole group didn’t think we had a good first period but it was obvious we dominated the last two periods,” Canucks coach Travis Green said. "When you play that way and don’t win, you’re not going to be happy by any means.”

NOTES: Sutter (groin) returned to the lineup for the first time since Dec. 12. ... Vlasic became the 17th defenceman to reach the 1,000-game milestone with one team. ... San Jose D Brent Burns, who led the team with 83 points last season, has no points in his past 11 games.