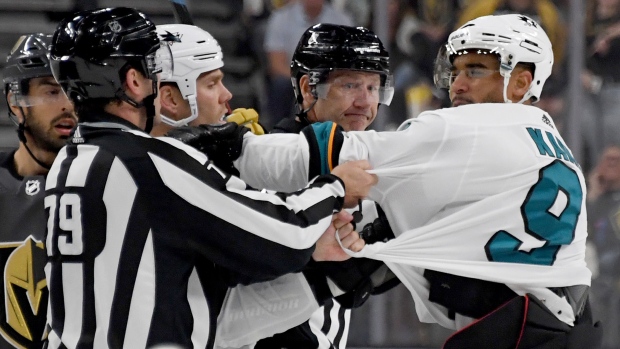 According to TSN Hockey Insider Bob McKenzie, San Jose Sharks forward Evander Kane is not expected to appeal his three-game suspension for Physical Abuse of Officials.

Kane officially received the automatic ban under Rule 40.4 on Tuesday, two days after he was ejected from the Sharks’ final preseason game against the Vegas Golden Knights for abuse of officials.

An appeal would have been heard by NHL commissioner Gary Bettman, who has the power to uphold, increase, decrease or rescind any suspension upon appeal.

This comes as no surprise but worth mentioning nonetheless: Evander Kane not expected to appeal his auto 3-game abuse of official suspension. Had he appealed, it would have gone to NHL commissioner Gary Bettman, who could uphold the ruling, rescind it or decrease/increase it.

The incident occurred at the 12:51 mark of the third period when Kane became involved in an altercation with Golden Knights defenceman Deryk Engelland. Linesman Kiel Murchison separated the two players and knocked Kane to the ice in the process, as the two got up, Kane appeared to shove Murchison in the chest.

Kane picked up a total of 27 penalty minutes in the game, including a 10-minute penalty for abuse of officials and a 10-minute misconduct.

Kane, who posted 30 goals and 56 points in 75 games last season, will be eligible to return from the suspension on Oct. 8 against the Predators in Nashville. He will forfeit $112,903.23 to the Players’ Emergency Assistance Fund.