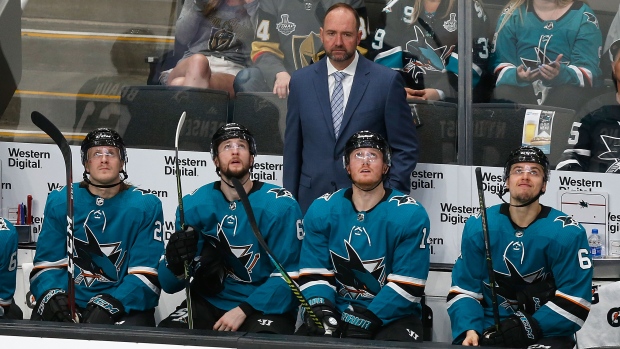 The move comes with the Sharks in the midst of a five-game losing streak, with a 15-16-2 record and in sixth place in the Pacific Division.

"When you have had a level of past success, change is never easy, but we feel this team is capable of much more than we have shown thus far and that a new voice is needed," general manager Doug Wilson said in a statement.

"As a team and as individuals, our play has not met expectations this year and our level of consistency has not been where it needs to be. This group of individuals who will lead our team moving forward are very familiar with our players, and we think this change can provide our group with a fresh start."

A native of Dunnville, Ont., DeBoer was in his fifth season as Sharks coach, leading the team to the postseason in all four prior campaigns, including a trip to the 2016 Stanley Cup Final in which the team ultimately fell to the Pittsburgh Penguins.

Wilson added, "Under the leadership of Pete, along with Steve, Dave and Johan, our franchise accomplished some great things, culminating in reaching the 2016 Stanley Cup Final. We want to thank them for their contributions to our organization's success over the last four years."

A centre in his playing days, DeBoer was taken in the 12th round of the 1988 NHL Entry Draft by the Toronto Maple Leafs, but never played in the NHL.

He began his coaching career in 1994 in the Ontario Hockey League where he would spend 13 seasons as a head coach with the Detroit/Plymouth Whalers and Kitchener Rangers before jumping to the NHL in 2008 as head coach of the Florida Panthers.

After three seasons with no postseason appearances, DeBoer was fired by the Panthers and hired by the New Jersey Devils in 2011.

DeBoer would experience immediate success with the Devils, going on a surprise playoff run and reaching the 2012 Stanley Cup Final, falling to the Los Angeles Kings in six games. Following two seasons in which the Devils missed the playoffs, he was fired midway through the 2014-15 season.

The 51-year-old DeBoer is one of only 11 active NHL coaches with at least 400 career victories.

The Sharks begin a seven-game homestand Thursday night against the New York Rangers.