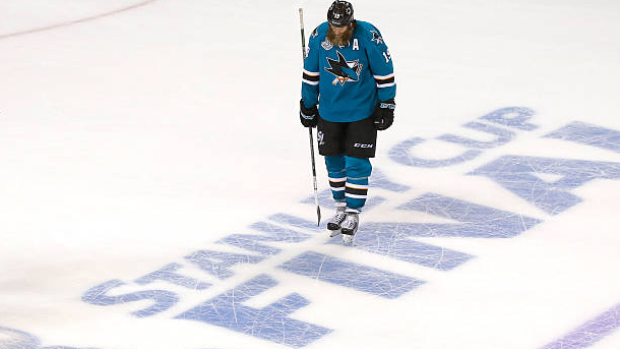 San Jose Sharks forward Joe Thornton said Tuesday he would have welcomed a trade on Monday, which could have allowed him another chance to chase the Stanley Cup.

“Yeah, obviously I was willing to go somewhere, and try to win my first Stanley Cup,” Thornton said, per Kevin Kurz of The Athletic. “I’ve been dreaming about that ever since I can remember and it just didn’t come to fruition, for whatever reason. I wanted to get something back for the Sharks obviously to help them continue this process with young guys. It just didn’t work out.”

According to TSN Hockey Insider Pierre LeBrun, three or four teams were interested in Thornton ahead of the trade deadline, but they were not elite contenders who he would have waived his no-move clause to join. LeBrun adds the Boston Bruins, Vegas Golden Knights and Colorado Avalanche are not believed to have approached the Sharks about a deal.

There was interest in Thornton yesterday, from 3-4 teams, but I don't think they were the elite Cup contending teams he would have waived for. Which is to say, I don't believe Boston, Vegas or Colorado inquired with San Jose. https://t.co/XUTTw1RJR7

“I really don’t know," Thornton said when asked why he wasn't traded. "Obviously, the (interested) teams went in a different direction. That’s obviously what happened because I’m still here, and still a Shark, which I’m happy to be. But I wanted another shot at the Cup. Obviously, I’m getting a little bit older. It’s not my last hurrah, I still think I’ve got more years left. But as you get older you realize you only have so many shots at this thing. It would have been nice to at least have a chance.”

Thornton has spent the past 15 seasons with the Sharks, reaching the playoffs 12 times and advancing to the Stanley Cup final once - in 2016, when the team was defeated by the Pittsburgh Penguins.

The 40-year-old has four goals and 27 points in 62 games this season with the Sharks, who sit 14 points back of the final wild-card spot in the Western Conference.

“I wanted a shot, you know? Believe it or not," Thornton added. "I’ve been hunting this thing down for 22 years, so I wanted another shot at it. I wanted to get something (for the Sharks) in return. It just didn’t work out. Back to the grind, and that’s how it is.”

San Jose did move veteran forward Patrick Marleau on Monday, sending him to the Pittsburgh Penguins, but Marleau did not own any trade protection.