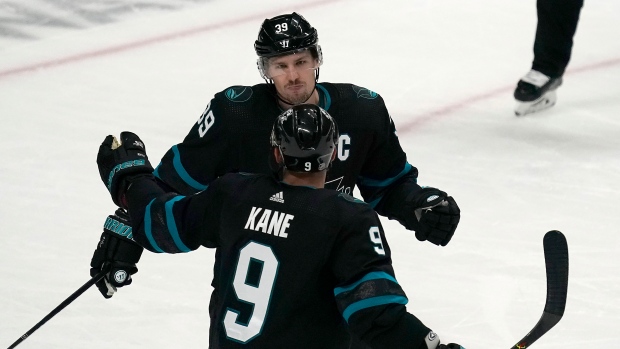 San Jose Sharks star Logan Couture took to Twitter Saturday afternoon to discuss racism in hockey and to thank teammate Evander Kane as well as former NHLer Akim Aliu for "speaking so loudly about this issue."

"I don't know how to properly write this message. First of all, I applaud Evander [Kane] for speaking the truth. Racism exists in society, it also exists in hockey," Couture wrote on Twitter. "That's a fact. Growing up in this game is a privilege. At times I think most of us have been at fault for turning a blind eye when it comes to racism. It cannot continue. I've had the opportunity to play with some incredible teammates. Black, white, all colours. Getting to listen to them talk about things they have gone through in hockey/life is eye opening.

"As a society and as hockey players we are only scraping the surface in fixing what desperately needs fixing. Thanks to Akim [Aliu] and Evander for speaking so loudly about this issue. We all need to learn, we need to love each other regardless of skin colour."

My thoughts. Sorry if this offends anyone. All love ❤️ pic.twitter.com/9BbktIrxqd

On Friday, fellow Sharks forward Kane joined ESPN's First Take to discuss the tragic death of George Floyd, who was killed by a police officer in Minneapolis earlier this week, and the need for white professional athletes to use their voices in the fight against racism.

“We need so many more athletes that don’t look like me speaking out about this, having the same amount of outrage that I have inside, and using that to voice their opinions, voice their frustration. Because that’s the only way it’s going to change,” Kane said. “We’ve been outraged for hundreds of years and nothing’s changed. It’s time for guys like Tom Brady and Sidney Crosby, those type of figures, to speak up about what is right and, clearly in this case, what is unbelievably wrong. Because that is the only way we’re going to actually create that unified anger to create that necessary change especially when you talk about systemic racism.”

Kane also said hockey specifically needs to do a better job when it comes to speaking out on social issues.

“I think hockey, unfortunately, has a different culture than some of the other sports in terms of speaking out and using your voice and speaking your mind. I think, for me, I’m one of the anomalies when it comes to NHL players and doing that.," Kane explained. "That’s another part of our problem is guys being scared to really speak their mind and stand up for what is right.”

Kane added that the same type of "team mentality" within sports needs to be brought to social issues outside of the sports world.

"In hockey, it's a majority white league by far. It's not even close. So we need to continue to come together. We talk about it all the time. We talk about how sports is for everybody. We talk about sports bringing people together," he said. "It's an inclusive thing, but when we talk about our own personal battles outside of sports, there's a lot of people that are silent on issues and they're important issues. They're issues that have been going on for hundreds of years and we need that some type of team mentality to be brought to issues outside of our sport."