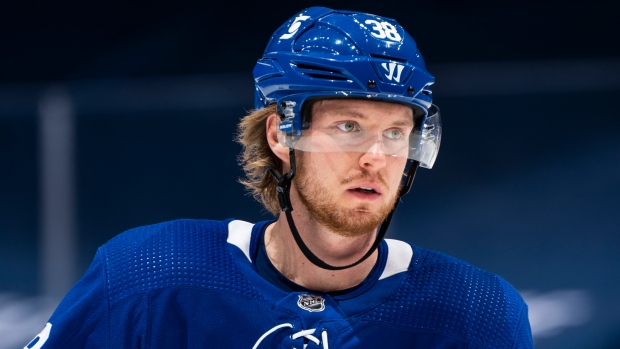 The Maple Leafs held an optional skate at the Enterprise Center on Saturday prior to their game with the St. Louis Blues.

"I had a couple bad plays in that shift so I was a little pissed," the 21-year-old said. "I saw that the d-man [with the puck] was looking at him so I tried to read the play a little bit earlier, a little bit before it happened, and I just stepped up. It was a pretty good hit, I thought."

It was one of 10 hits that Sandin was credited with during the win in Vegas.

"I like watching hits," Sandin said. "I mean, it's a part of the game as long as you keep it clean. There should be a purpose with the hit and they didn't get the zone entry there so it worked out pretty well."

"Ras has always had that as part of his game," said Maple Leafs head coach Sheldon Keefe, who also coached Sandin in the American Hockey League. "I think back to his time stepping in as an 18-year-old with the Marlies and he was very physical. I think that's maybe an underrated part of his game. It's always been there."

Despite standing just 5-foot-11, 178 pounds, Sandin has already landed some big hits in his young NHL career. He leads all Leafs defencemen in hits per 60 minutes this season (6.61).

"Ras is a physical and competitive guy and that's part of his game," Keefe continued. "If you're a little undersized you need to be very physical, very competitive and fearless if you're going to succeed in league. He has that and that gives him a chance to play as a young guy."

St. Louis Blues players should keep their eyes on No. 38 tonight, because Sandin may be a bit ornery. He was scratched on Wednesday in Arizona in a move that Keefe suggested was tied to salary-cap constraints.

"It's not the best thing, obviously, when you're sitting up top watching a game that you think you maybe can play, but I'm back today and ready to play," Sandin said.

Another reason Sandin may be agitated tonight? He hasn't been sleeping well during this road trip, which started on Jan. 7.

"I can't wait to get home to my own bed and my own pillow, especially," he admitted. "I need to learn from this and bring my own for the next road trip."

What's different about his pillow?

"Oh, it's just perfect," Sandin said with a smile.

Despite playing on Toronto's top unit, forward Mitch Marner has gone 99 games without scoring a power-play goal. His last man-advantage marker was way back on Feb. 1, 2020.

"I find it odd," Keefe said. "We're aware of it and we're trying to do different things to help get something to fall for him ... This season our power play's been as good as anyone in the league for the most part so I'm not too concerned about it. We're always trying to find ways to get better so we'll continue to monitor it and look at it."

The Leafs are tied for second overall with the Blues in power-play percentage this season (29.6).

"I'm not overly concerned with who's scoring the goals," Keefe said. "I'm just concerned about whether or not it goes in the net and it has gone in quite a bit for us this season."

Ten different players have scored for the Leafs on the man advantage this season. Marner has recorded seven power-play assists.

"He hit a couple posts, in the last game he played, on the power play," Keefe pointed out. "We'd like him to find ways to be more of a threat and score on the power play, but the reality is our power play was really rolling for a period of time there when Mitch was in."

The Leafs power play has cooled off a bit of late. The team is 3/13 in five games since the calendar flipped to 2022.

"Some of that is because we haven't played a lot of hockey and gotten the reps," Keefe said. "Part of it is because we're out of sync a little more now without having Mitch in three of the five games since Christmas."

Marner will return to the lineup tonight after spending a week in the COVID protocol. He skated in his usual top on the flank of the top unit at Friday's practice, per David Alter of The Hockey News.

Pierre Engvall, who went into COVID protocol the same day as Marner, will also return to the lineup tonight. The 6-foot-5 winger skated on the third line with David Kampf and Ilya Mikheyev at Friday's practice.

"I feel good," Engvall said. "I wasn't too sick with the COVID so I feel I didn't lose too much."

Engvall's return will bolster Toronto's forecheck. The 25-year-old Swede feels like that's the area where he's improved the most this season.

"With his size and speed, it's a natural fit," said Keefe. "When it's time to go retrieve a puck he should be as good as anybody in the league in terms of getting on it first."

Engvall isn't the only Leaf who has taken strides in this area.

"It's been more of a focus for us as a team this season," Keefe said. "The reality of the league is it's going to force you to have to go forecheck the puck back if you want to spend time in the offensive zone and play on offence. He's learning that and our team is learning that. Our forecheck has been a good asset for us when we've been at our best."

Morgan Rielly is sixth among NHL defenceman with 25 assists this season. He leads the Leafs, one of the top teams in the NHL, in ice time (24:01 per game). And yet Rielly did not receive an invitation to the all-star game.

"It's a crazy thing that Mo hasn't gone with how many years he's had here of just producing and doing great things and helping our team win," said Marner. "He's another guy that deserves to be in that opportunity and that game."

The current all-star game format (three-on-three game with every team needing to be represented) means that deserving candidates are left out every season. The Leafs will be represented this year by leading scorer Auston Matthews, who was voted captain of the Atlantic Division team, and Jack Campbell, who's putting up Vezina Trophy calibre numbers.

Forward John Tavares is Toronto's representative in the Last Men In vote, which will determine the final player on each of the four teams.

That means that, like Rielly, William Nylander isn't getting a chance to experience the mid-season showcase. That raised eyebrows in the Leafs room, because the smooth-skating Swede is second on the team in points (36) and goals (16).

Was Sandin surprised to see his countryman snubbed?

"A little bit, actually," he said. "I think he's been really, really good for us. Everyone recognizes his game on the ice and how hard he's been working and how good he's been playing for us. We recognize that. If he keeps going like this, he's going to be in one of those games some time soon."

There's no doubt, among the Leafs at least, that Nylander belongs among the league's elite players.

"The most important thing is that he sees himself in that group," said Matthews. "He's confident. He's been playing great for us. His role, in general, and responsibilities have expanded and he's taken it upon himself to be good in a number of these areas. He's been playing unbelievable for us."

"It's tough," concluded Marner. "There's not a lot of spots. Obviously, you got to fill all the teams in there. The good thing about our team is I don't think it bothers anyone. We don’t really dwell on it too long."

#Leafs on the ice for optional skate here in St. Louis: