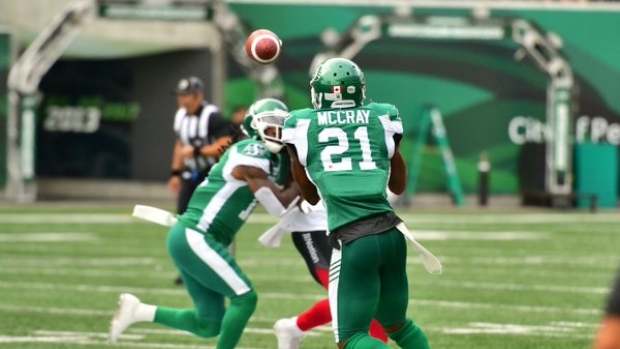 REGINA — The Saskatchewan Roughriders and Ottawa Redblacks are continuing to go in opposite directions.

Three first-quarter interceptions by a vindictive Riders defence helped the home team build an early 20-0 lead, one they wouldn’t relinquish in a 40-18 victory over the reeling Redblacks on Saturday.

Saskatchewan has now won five in a row, while Ottawa lost for the seventh time in eight outings.

“We always want to get at least three turnovers in a game. We always place emphasis on that,” said Riders defensive back Ed Gainey, after his team improved to 6-3. “We were able to come out tonight and start fast and put the offence in good position to do their thing.”

Those turnovers quickly turned into points for Cody Fajardo and the Riders offence. William Powell and Fajardo each rushed for touchdowns and Brett Lauther added two field goal as the Riders jumped out to a commanding lead.

“It was just a tough game for me out there,” Davis said. “No formula to it. I just didn’t have a good game.”

“If we take care of the football, which we did the rest of the way, then I think you’re going to see a game that’s pretty toe to toe,” added Ottawa head coach Rick Campbell. “We were trying to fight our way back and we couldn’t fight all the way back.”

If there was any hope for the Redblacks, trailing 25-15 midway through the third quarter, it was quickly dashed.

After Lewis Ward's fourth field goal brought Ottawa to within 10, Fajardo guided the Riders on a seven-play, 75-yard scoring drive, capped by a 15-yard touchdown catch from Naaman Roosevelt.

Fajardo completed 24-of-36 pass attempts for 241 yards and one touchdown to go along with his rushing major. He is 6-2 as a starter this season.

More importantly for Saskatchewan, that scoring drive was a knockout blow.

“The momentum was shifting and we definitely needed that drive. That was huge for us,” Roosevelt said. “Cody did a great job moving his feet and buying more time… he came running to my side and made a great throw and I just wanted to catch the ball for him.”

Five consecutive wins has moved the Riders into a second-place tie with the Edmonton Eskimos in the West Division.

A home-and-home series with the Winnipeg Blue Bombers beginning next Sunday has Saskatchewan sniffing first place in the division. They’re four points behind Winnipeg heading into Labour Day.

Ottawa, on the other hand, slipped further from playoff contention. The Redblacks (3-7) will use the upcoming bye week as an opportunity to decide who will start at quarterback when the team returns to action Sept. 7 versus Toronto.

Davis was pulled after his third interception. He was 3 for 6 on pass attempts for 23 yards. Jonathon Jennings replaced Davis and threw for 208 yards and one touchdown, a 75-yard strike to Dominique Rhymes just before halftime.

“I thought our offence tonight, when Jonathon got in there, showed some flow, some signs of life. We started doing some things and moving the ball,” Campbell said.

“There’s no reason to have to make any decisions tonight. We have the bye week coming up, so we have two weeks. We will play whoever gives us the best chance to win.”

Saskatchewan’s William Powell had two touchdowns and a game-high 70 yards rushing against his former team.

Saskatchewan was penalized 16 times for 186 yards. Ottawa was flagged four times for 35 yards.