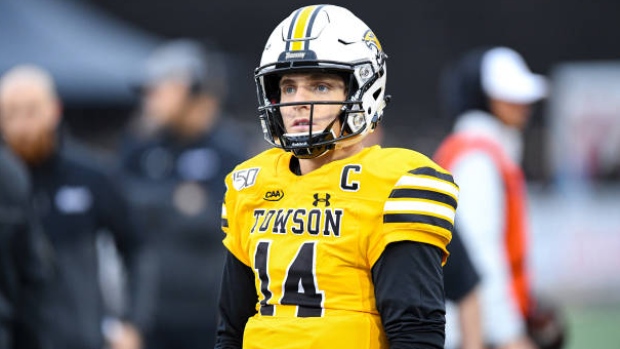 Flacco joins the Roughriders after two strong seasons at Towson University in Maryland.

In his senior year, Flacco was named to the All-CAA second team, finishing the regular season with 2,831 passing yards, 22 touchdowns and just six interceptions while adding 324 rushing yards and two rushing touchdowns.

As a junior, he finished fifth in voting for the 2018 Walter Payton Award given to the top offensive player in NCAA Division I football.

That year he matched the Towson single-season record with 28 passing touchdowns and threw for 3,251 yards while also adding 742 yards on the ground.

Flacco is the younger brother of NFL quarterback Joe Flacco.

The Regina native had 32 catches and 362 receiving yards over 15 games last season. He also had a catch for a two-point convert and a career-long 51-yard reception against Edmonton in the Labour Day Classic.

Calgary selected Sindani in the eighth round of the 2017 CFL draft. He made the Stampeders roster in 2018 and was a member of Calgary’s Grey Cup championship team.

Nelson took part in the Winnipeg Blue Bombers' training camp in 2018 and participated in the Cleveland Browns and Cincinnati Bengals rookie mini-camps a year earlier.

He also played for the Dallas Renegades and for the San Diego Fleet in the defunct Alliance of American Football.

Rutter was the North Central University Cardinals' starting quarterback from 2016 to 2019.

The Regina native has two defensive tackles, one special-teams tackle and two sacks in 20 career games with Hamilton since being selected in the second round, 15th overall, in the 2018 CFL draft.

The University of Calgary product was a U Sports second-team all-Canadian in 2017.

Davis was a seventh-round pick out of the University of Ottawa in the 2020 CFL draft. He was a U Sports first-team all-Canadian in 2019.

Pickett was a third-round pick out of Guelph in 2018.

Jackson had six defensive tackles, six special-teams tackles and one sack with the Redblacks in 2019 after starting the season with Edmonton.