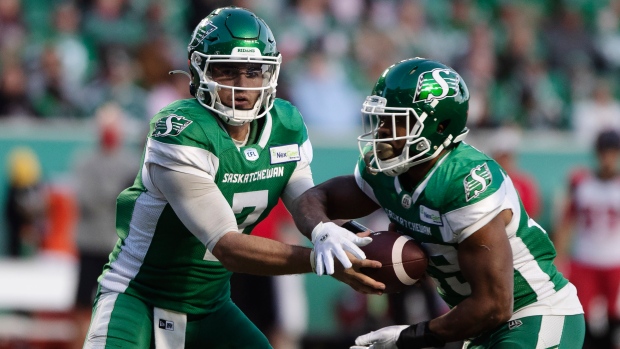 CALGARY — Will the third time be the charm for the Saskatchewan Roughriders?

The Roughriders (5-4) face Calgary (5-5) at McMahon Stadium on Saturday in Saskatchewan's third straight meeting with the Stampeders.

By a quirk of the CFL schedule, Calgary is the only opponent Saskatchewan has seen so far this month.

Calgary surged out of the West Division basement winning three straight in October, including a home-and-home against the Roughriders.

The Stampeders edged Saskatchewan 23-17 at McMahon on Oct. 2, followed by an even narrower 22-19 victory at Mosaic Stadium the next week.

Calgary is coming off a 39-10 domination of the B.C. Lions during a bye week for the Roughriders.

"It's not like we're getting dismantled by them. It's a few plays here, a few plays there and maybe it's a different result."

There are pros, and cons, to playing the same opponent three consecutive games.

"You don't have a whole lot of film work in terms of stuff you haven't seen, so the film is there," Saskatchewan head coach Craig Dickenson. "There's a familiarity you have with the opponent.

"The con is they're familiar with you as well. The challenge is to try and come up with some new and different things that can keep them off balance because they've seen what you do and you've seen what they do.

"Motivationally, there's a pro because we've been beaten twice by them, so I think our guys are motivated to go out and play hard and prove they can beat this team. But then, the con is Calgary probably has a lot of confidence right now because they've beaten us two in a row."

Dickenson's brother, Dave, who is the head coach of the Stampeders, says he'd be shocked if the Roughriders didn't throw "big-time wrinkles" his team's way Saturday.

"Ultimately, we have to do a great job on our sideline, if we are getting some new wrinkles and new looks, communicating to our players, and then morphing our rules to handle it," Dave Dickenson said.

The Roughriders want to avoid a season sweep and stay ahead of the Stampeders in the conference. The Stamps (4-3) have a better record against West Division opponents than the Roughriders (2-4).

With the defending Grey Cup-champion Winnipeg Blue Bombers (9-1) running away with the division, it's a three-way race between Calgary, Saskatchewan and B.C. (4-5) to host the conference semifinal.

"We have a chance to control our destiny," Stampeders quarterback Bo Levi Mitchell said. "The only way to do that is if we go out there and give everything we absolutely have and not treat this as if it's a team we've beat twice this year."

Mitchell spread his 270 passing yards in Vancouver among nine different targets. One of his favourites returns Saturday.

Kamar Jorden led the CFL in receiving yards when he was waylaid by a hamstring injury. The slotback draws into the lineup again after sitting out three games.

"He's a playmaker," Mitchell said. "He makes those catches a lot of guys don't make."

A CFL all-star with the Edmonton Elks in 2018, Williams returns to the league after two years with the NFL's Buffalo Bills.

"Any time you get some experienced CFL guys, two guys that have been CFL all-stars in this league, I think it's going to inject some office life into our offence, but not only that, I think our team as well," Fajardo said.

All-star cornerback Tre Roberson, whose interception sealed Calgary's Grey Cup win in 2018, reunited with the Stampeders this week after an NFL stint. But he won't play Saturday.

Notes: Stampeder backup quarterback Jake Maier returns to the lineup after a stint in COVID-19 protocol . . . Mitchell is two completions away from breaking the Stampeders' all-time record held by Henry Burris (2,267) . . . Fajardo is winless (0-4) in his career against Calgary, but 17-4 against other CFL clubs . . . Saturday's forecast for Calgary is calling for a 90 per cent chance of rain, winds of 26 kilometres an hour and a high of 9 C.

This report by The Canadian Press was first published Oct. 22, 2021.