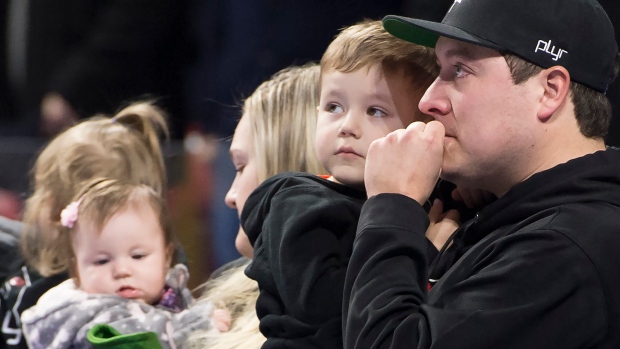 The family of Aly Jenkins

Jenkins tragically passed away at the age of 30 last October due to complications while giving birth to her daughter Sydney, leaving behind husband Scott Jenkins and their three young children: four-year-old Brady, one-year-old Avery and now four-month-old Sydney.

An emotional ceremony involving Jenkins family and her former teammates took place ahead of Draw 4 at the Scotties Tournament of Hearts in front of a near capacity crowd.

Sherry Anderson, Jenkins’ former skip, fought through tears while speaking to the media following the ceremony, but says it was marvelous to see the community come together to support the family.

“People get behind people, especially in Saskatchewan. Especially because of the very tragic way it happened. I don’t imagine it would make a difference if we were curlers or hockey players or volleyball players, it would have been the same. It was a very, very tragic thing that happened,” said Anderson.

Nancy Martin, another former teammate, was also in attendance Sunday and said it was really nice for everyone to stop for a moment and remember Aly.

Martin hopes Sunday can bring some sense of closure to Aly’s husband, Scott. 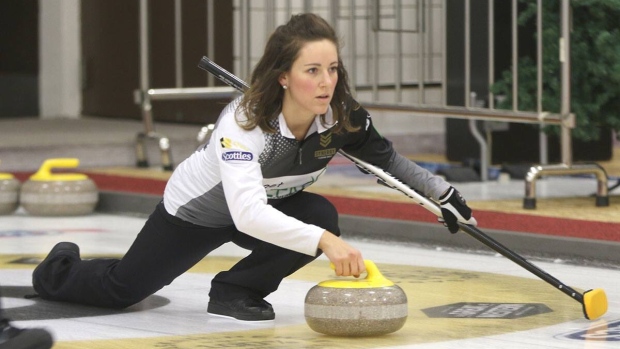 The ceremony took place on the same day as the Sandra Schmirler telethon which strives to raise money and help save the lives of babies born too young or small. Schmirler was an Olympic, world and Scotties curling champion from Saskatchewan, who also passed away tragically at the age of 36 after a battle with cancer. And like Schmirler with her two daughters, Anderson hopes curling can play a part in helping to keep Jenkins’ memory alive for her three young children.

“There will be times people will be able to say, ‘your Mom did this or that.’ Right now they’re pretty young so unfortunately probably the two youngest ones in a few years won’t remember their Mom,” said Anderson. “So that’s unfortunate, but certainly there will be reminders in the curling community about Aly for sure.”

The October tragedy especially hit home for members of Team Ontario. Skip Rachel Homan and second Joanne Courtney both gave birth to their first children this off-season and were heartbroken to hear the news of Jenkins’ passing.

“It is unbelievably hard and I can’t even imagine what it felt like for their family. It obviously hit home with us as well,” said Homan. “I can’t imagine trying to get through something like that so reaching out and trying to do everything we can to support their families is important as curlers. Everyone across Canada has given their family so much support.”

Team Homan has been keeping in touch with the family ever since and are paying tribute to Jenkins this week in Moose Jaw with decals on their brooms.

“I think it’s great that curling community has rallied around the family. I don’t think it will ever replace, but I think it’s absolutely touching to see her memory live on,” said Courtney. “I know that anybody who has experienced loss in the first immediate after-effects there’s lots around you, but then it all goes away and you’re still going to miss her every single day. To see that we’re doing something here that means a lot.”