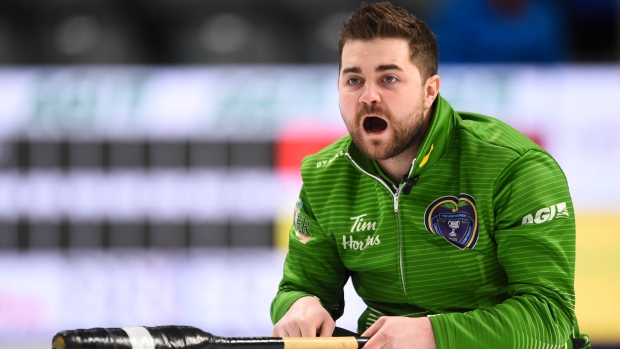 KINGSTON, Ont. – Matt Dunstone and his rink from the Highland Curling Club in Regina have earned the right for a second chance to play in the final of the Tim Hortons Brier.

Dunstone, third Braeden Moskowy, second Catlin Schneider and lead Dustin Kidby ran into a red-hot Alberta squad Saturday afternoon in the page playoff 1 vs. 2 game, losing 9-4. When three of four members of Team Brendan Bottcher shot 90 per cent or better (the skip shot 89 per cent), Dunstone needed to be just about perfect to have a chance.  He wasn’t on this day.

“They played great and I had a couple stinkers out there. That was the difference,” the 24-year-old Winnipeg native said after the game.

The 2020 Brier might just be one of the greatest Canadian championships to ever take place. The top eight teams in Canada reached the championship round for the first time in the short history of the new format. After two days of play, eight rinks were only cut down to seven, leading to a four-way tie for the last page playoff spot and a double tiebreaker scenario, meaning an already gruelling week just got that much tougher for a team like Northern Ontario. It’s a true testament of how great this Brier field is.

The shots have been spectacular too. You’d need two hands to count all the highlight reel shots Dunstone has made this week.

The shot-making, competition and crowd atmosphere in Kingston has made for one of the most memorable weeks at the Brier since 2017 in St. John’s, Nfld. The juicy storylines have been abundant too with Saskatchewan being on top of that list.

With Jacobs, Gushue, Bottcher, Kevin Koe, John Epping and Mike McEwen in this year’s field, Dunstone came into the 2020 Brier as a major underdog, despite winning their first Grand Slam title earlier this season.

Team Dunstone finished with an 8-3 record through the championship round as Saskatchewan made the playoffs at the Brier for just the fourth time in the past two decades and the first since 2015. They haven’t won the Tankard in 40 years.

Saskatchewan coach Adam Kingsbury, who was brought on this season, says they’ve started to believe they belong with the best in the game.

“Coming into an event like this we knew nobody expected this team to be there,” Kingsbury told TSN.ca after Saturday’s loss to Alberta. “We knew that, but the truth is, especially in that Slam when they showed they could beat the best teams in the world, they’re slowly starting to see that they’re capable of doing that when they buy into the adage of one shot at a time.

“Already, we’ve been apart of the most exciting Brier that I can remember. Until there are no more rocks to throw, your entire process stays the exact same,” he said.

Dunstone reached out to Kingsbury this off-season, hoping he could join the squad after a brief one-year stint with Team Jacobs. At this point, most know Kingsbury’s story. The PhD in clinical psychology has never curled competitively, but brings knowledge in getting the mind to the right place in order to reach full potential on the ice.

“Learning about yourself, what triggers you, when you’re rushing. What are the things that are going to get you your best throws,” explained Kingsbury.

The skip says Kingsbury has been a very helpful addition.

“Every team he’s been apart of has had success. Adam is so good when it comes to helping us put this all in perspective, actually enjoying it all and soaking it all in,” said Dunstone. “This is as cool as it gets in curling. He’s been huge for us and just helping us rally throughout games and help us battle back.”

Kingsbury, who also spent time with Rachel Homan’s Ottawa rink during their Canadian and world championship victories in 2017 and their Olympic run in 2018, says it’s been fun, but sometimes stressful to watch Team Dunstone compete this week due to the drama and competitiveness of the event.

“It actually difficult to sit on the bench because it’s the highs and the lows and you have really no power,” he said. “You get to know these guys and you feel for them. You want them to experience success, but I have a pretty good set for some brilliant shots. I think there’s more to come.”

It’s been a wild 10 days for John Epping and his Toronto foursome as the crowd favourite at Leon’s Centre.

Epping’s week started off with three straight wins, including a victory over the defending champs in their opener last Saturday. They proceeded to drop three in a row and were in a deep hole against Northwest Territories in their round robin finale. After storming back to beat them, Epping won three of four games in the championship round against the best in Canada just to make it to a double tiebreaker.

Ontario was eliminated by their rivals from up North in the second tiebreaker Saturday afternoon.

“This has been a phenomenal Brier. One that I’ll never, ever forget,” said Epping. “It just makes you want to come back and try it again because I really want to win one.”

Team Epping have already qualified for the 2021 Roar of the Rings Olympics trials after winning the Canada Cup in December.

“This is a team that’s made for a long run together. We really enjoy working together. We enjoy each other’s company and we make each laugh,” said Epping. “There’s no quit and you can see that. We just want to grind it out. Look at how many games we’ve played this week. We had our back against the wall a few times and came through. “