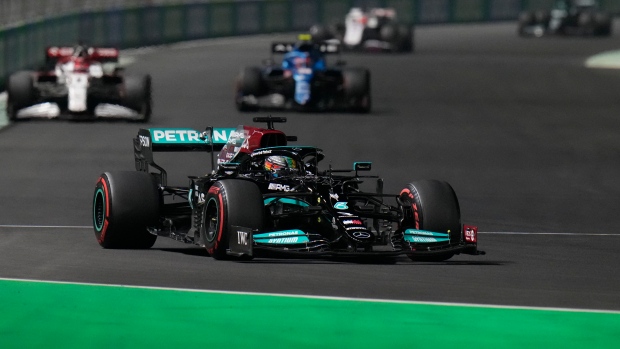 Hamilton, the seven-time world champion, jumped to the top of the qualifying board with about 80 seconds remaining in Saturday's session. Valtteri Bottas, his Mercedes teammate, then moved to second.

It gave the current championship leader one final lap around the high-speed course to try to claim pole. But the Dutchman went wide in the second turn and nearly brushed the wall, then finally gave it a hard slam in the final turn as Verstappen desperately tried to bump Hamilton and Bottas from the front row.

Verstappen climbed from his damaged Red Bull and walked down the street circuit shaking his head in dismay. He then climbed through a hole in the safety fencing, caught a ride in the backseat of the safety car and returned to the paddock.

“That was terrible,” Verstappen said. “We don't understand what happened. I locked up and I still tried to, of course, keep the car on the track to try to finish the lap but it clipped the rear and I had to stop. P3 is is a bit disappointing.”

Verstappen was likely on pace to take the pole from Hamilton.

The two championship rivals — they are separated by eight points with two races remaining — bumped fists after the session.

“What a tough track this is, incredibly technical and complex,” Hamilton said. “It's amazing what they've built here, track-wise the speed and the pace around here is phenomenal.”

Hamilton earlier was summoned before the stewards for violating yellow flag rules in practice, but the British driver was not penalized. He was later issued a warning, though, and Mercedes was fined 25,000 pounds ($33,000).

With a perfect race on Sunday, Verstappen could clinch his first F1 title with a victory and a seventh-place finish by Hamilton. But he may also receive a penalty on the starting grid if Red Bull needs to make significant repairs to Verstappen's car.

Hamilton used back-to-back victories last month to slice 11 points from Verstappen's lead. After qualifying, he embraced Bottas for locking up the front row for Mercedes.

Bottas is being replaced at Mercedes next year and Hamilton heaped praise on his teammate.

“The collaboration has been just epic with Valtteri, he's the best teammate there's even been in this sport, for sure,” Hamilton said.

Hamilton, who was fastest in both of Friday's practices, has a chance to leave Saudi Arabia tied with Verstappen in the standings if the Mercedes driver wins on Sunday and scores maximum points.

The drivers have praised the high-speed street circuit that spans 6.2 kilometers (3.8 miles), with 27 corners (16 left turns, 11 right turns). It was built along a 30-kilometer (18.6-mile) coastal resort area in Jeddah and workers were still completing final touches ahead of this weekend's F1 debut in the country.

F1 is closing its season with three consecutive races in the Middle East and four total stops in the region this year. Hamilton spoke out in Bahrain and Qatar and said on Thursday he wouldn’t choose to race in Saudi Arabia. The season concludes next week in Abu Dhabi.