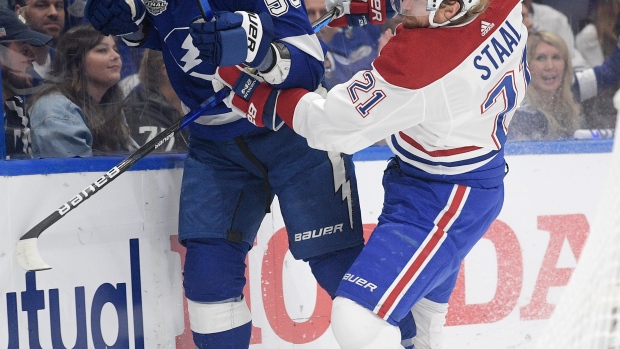 TAMPA, Fla. (AP) — David Savard is no longer the only veteran on the Tampa Bay Lightning without a Stanley Cup championship.

The grizzled defenseman, who had never advanced past the second round in his first nine NHL seasons, joined in the celebration Wednesday night after the Lightning won its second consecutive championship with a 1-0 win over Montreal in Game 5.

Savard was the second player to hoist the Cup after Steven Stamkos passed it to Victor Hedman on the ice.

“It's been an unbelievable ride,” Savard said before the game. “The last few years, they had an awesome, awesome run. It was just something really special for me to come in. I knew they had a chance to go at it again. To fit in and be able to help them go all the way, it would be nice.”

Savard has been perhaps the final piece the Tampa blue line needed to be complete. Along with rookie Ross Colton, Savard has also brought a fresh hunger for a first title that can benefit a defending champion.

Lightning players and coach Jon Cooper had hoped to get Savard’s name on the Cup.

"He’s a popular guy in the room and so players are naturally pulling for guys like that to enjoy the success that we had last year," Cooper said Wednesday. “When you’re with a group where pretty much everybody on the team has a ring from last year, I think you kind of feel a little bit left out. I know guys are pulling for him.”

After Savard and the Blue Jackets upset the Lightning in the first round in 2019, Tampa Bay went through Columbus on the way to the bubble hockey championship. The 30-year-old has since learned a lot about what makes this team click.

“It’s just the calm inside the room,” Savard said. “I think no matter what happens, we stay focused. You learn from guys who have been through that road."

Savard's road included playing 37 playoff games during almost a decade with Columbus. Game 5 Wednesday night is his 20th for the Lightning, so although he may feel a little left out from not winning last year, Savard appreciates what made that run happen and his role as the new guy.

“That group every time, they come back and they’re resilient,” Savard said. "Winning last year was great for them. You just want to be part of all that. I think it makes it special."

Savard was competing with a heavy heart after 24-year-old former Columbus teammate Matiss Kivlenieks died Sunday in a fireworks accident. He found out from former Blue Jackets captain Nick Foligno in a text message the morning of Game 4 on Monday.

Missing Alex Killorn since late in Game 1 of the final because of an undisclosed injury, the Lightning turned to Mathieu Joseph to fill the void. Joseph hadn't played since Game 3 of the first round, but has been effective in a limited, fourth-line role and assisted on Patrick Maroon's tying goal Monday night that forced overtime.

“Like I tell these players, eventually your time is going to come and now it’s come and Jo's making the best of it,” Cooper said.

Joseph played all 56 regular-season games and became the odd-man out when first-line winger Nikita Kucherov returned at the start of the playoffs. Killorn’s injury provided another opportunity, which Joseph has capitalized on.

“He’s done what we’ve needed him to do,” forward Blake Coleman said. “He’s been fast; he’s been physical. He brings a lot of energy into our lineup. It’s great when you can rely on a guy who’s got the experience that he does and the skill that he does to come in and do a job like that.”

Tropical Storm Elsa blew through Tampa late Tuesday into Wednesday, but cleared up early enough that it did not disrupt morning skates at Amalie Arena, let alone Game 5. The NHL had been monitoring the situation in case it needed to be rescheduled.

Caufield called this the “best hockey I've ever had” and, it shows. The 20-year-old is not at all nervous in the big moments.

“That’s just when you’ve got to focus a little bit more,” Caufield said. “Those are parts of the game that are really important and anytime you get out there, you got to do the right thing. I think we’ve been in a lot of those situations during these playoffs and you kind of just learn and grow from them.”

Caufield, who won the Hobey Baker Award as the top college player this season and was playing at Wisconsin as recently as March, put up 12 points in his first 19 playoff games.